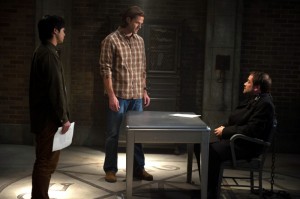 SUPERNATURAL inches the seasonal arc forward with “Heaven Can’t Wait,” an episode that plants hints of what is to come. Mostly, “Heaven” is a mixture of comedy, with Castiel is now calling himself Steve and working diligently at a gas station convenience store, and mild angst, with Castiel still not knowing why Dean (Jensen Ackles) sent him away and Dean still unable to tell the truth.

However, when people in now-human Castiel’s new neighborhood start exploding into a fine pink mist, this is clearly a case for the Winchesters. Since Dean knows that the angel Ezekiel, hiding inside Sam (Jared Paralecki), doesn’t want to go near the much-hunted Castiel, Dean goes alone. As everybody is in the middle of trying to translate another chunk of angel tablet, which involves the kind of book research Dean hates, Sam and Prophet of the Lord Kevin (Osric Chau) aren’t suspicious that Dean is using this “excuse” to avoid sitting and reading.

Sam and Kevin induce the captive Crowley (Mark A. Sheppard) to translate what Kevin has translated so far (he’s managed to put things into symbols but not English words) by allowing Crowley a “phone call” to Abaddon (Alaina Huffman). As a reminder, demonic phone calls are achieved by spilling blood into a bowl. (Good thing Crowley insisted on Kevin’s, or Ezekiel-in-Sam might have been revealed.) Crowley is furious, and Abaddon is smug, that she’s breaking all the deals he made and taking bartered souls before their time. Crowley translates the symbols and says there is no way to reverse the spell and get the angels back into Heaven.

Meanwhile, Cass realizes the strange deaths are caused by one of the angels who detected and relieved battlefield suffering when angels went to war. On Earth, this angel is simply reacting to any kind of pain. In fact, the angel is tracking Castiel, who is in considerable emotional pain, despite trying to be the best human convenience store worker he can be. Dean ganks the angel before the angel can gank Cass.

There is a whole sitcom-worthy (and not necessarily in a good way) subplot about Cass mistaking the compliments of his female boss (Tanya Clarke) as an invitation to go out on a date, when she’s really asking him to babysit for her while she goes on a date with someone else. This would be better if her wording were more ambiguous, but it’s so weighted toward getting Cass and the audience to view it as a romantic overture that the woman comes off like a duplicitous jerk. At the end, it seems like we’re meant to perceive her as guileless (she doesn’t realize Cass misunderstood), but it doesn’t play that way.

Even so, the babysitting sequence allows Collins as Cass to offer up a rumbling a cappella rendition of the theme from GREATEST AMERICAN HERO while trying to sing the baby to sleep. Since clearly every character on every show should do this, Castiel and SUPERNATURAL win major points for doing it first.

Sheppard is a lot of fun to watch in the midst of Crowley’s exasperation and manipulation, and Chau remains reliably excellent as Kevin. The politics of the running of Hell is an intriguing arc, and this episode is a good building block. Whether or not Heaven is really closed remains to be seen.

As for the Dean and Castiel moments, we get Dean parked outside the convenience store, working up the courage to go inside as he gazes through the glass door at the unknowing Cass. The show knows what it’s doing and it’s honestly sweet that it continues to serve all quadrants of its fan base, even or especially in shots like these. Carry on now, SUPERNATURAL.

Related: News – SUPERNATURAL CONVENTION on May 22-24 with Jared Padalecki and Jensen Ackles on stage together