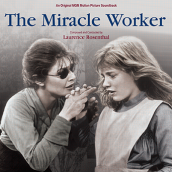 Helen Keller remains the most famous special needs student in history, her struggle to the light after being looked at as being blind, deaf and dumb guided to the light by the miraculous efforts of her teacher Annie Sullivan. With Keller’s valiant lessons in living fully first detailed in her book, then seen on stage in William Gibson’s play, it was only natural that Hollywood would afford a completely sensory version of struggle with Arthur Penn’s Oscar-winning 1962 adaptation of THE MIRACLE WORKER. One of its biggest challenges was given to Laurence Rosenthal, who had to conjure the sound of music, as heard within the head of a girl for whom audio didn’t exist. The result was an extraordinary, practically experimental score that smashed together dissonance and melody, the feeling of a soul grasping her way through confusion to latch onto the pleasure of harmony that so many of us take for granted.

Anchored by a lovely theme, Rosenthal’s work challenges the listener in much the same way as Sullivan does her pupil, angering us with often confounding atonality that nevertheless carries a beautiful, glisteningly child-like melody within it. There’s a tenuous, eerie psychology to the score as well as Rosenthal looks within an individual’s seeming void, much in the same way that Jerry Goldsmith did that year in his chillingly beautiful score for FREUD. But where that soundtrack echoed the protagonist’s Viennese background, Rosenthal uses subtly Americana melodies to evoke the Kellers’ Alabama heartland. But perhaps the most striking element of all is how Rosenthal weaves the lullabye “Hush, Little Baby” into the score to both eerie and poetic effect, proving it as the cinema’s single creepiest lullabye. For a score on the groundbreaking order of Alex North’s A STREETCAR NAMED DESIRE and Leonard Rosenman’s EAST OF EDEN, Kritzerland has done an excellent job of re-mastering this previously out of print classic, making for a truly involving experience that uses all of the musical senses to show the movie music in a new light.

Clink on the link to Purchase THE MIRACLE WORKER soundtrack