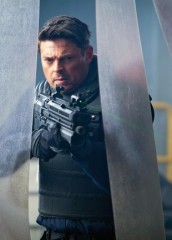 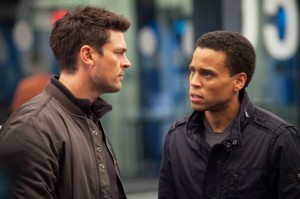 ALMOST HUMAN plays very much like a modern BLADE RUNNER in a variety of ways. It is the future where man and machine are intertwined like never before. There are synthetics that exist in our daily lives – this time, however, as part of the police force rather than outlaws. Crime is at an all time high. There is a blend of cultures on the streets.

The drama doesn’t play itself off as understated as the classic movie but from the “Pilot” episode there is a lot of potential here for this to be something special if done right.

The episode begins with a raid on a highly weaponized gang where both synthetic and human officer fight side-by-side. But the gang was expecting the raid and kill everyone of the officers, except for John Kennex (Karl Urban) that organized the raid – so he takes part of the blame – but ends up in a coma with a leg blown off.

Fast forward two years and Kennex is out of a coma and looking for answers to what went wrong as his memory is a little hazy. Things have changed in two years, human cops are now required to be partnered with a synthetic whether they like it or not. His first synthetic, well, doesn’t get off on the right foot with Kennex, so he gets a new one, Dorian (Michael Ealy), an older model of synthetic that was built with human emotion software but his model was phased out of production because they were too twitchy (maybe an ALIENS reference?).

Naturally, Kennex doesn’t really like the synthetics but quickly learns that Dorian with his emotion software is something of a different soulless being and has a lot of talents that come in handy when the same gang that put him in a coma resurface and are stealing various components and planning an attack.

Soon they learn the attack in on the police in order to get to a piece of evidence that is locked away in a RAIDERS OF THE ARK-type storage facility. After they stop the attack, they search for the evidence that has been locked away but all records of it have been deleted, so they have to do an extensive search through each item in order to find it. We see at the end, that it is a head of a synthetic locked away in a container.

ALMOST HUMAN has a lot going for it. A very strong cast (and with the hot as balls Minka Kelly in tow doesn’t hurt). A strong premise with a lot of possibilities as to what they could do – it is the future after all so the sky is the limit. Now, the thing is will it languish as other series have done in making it a killer or synthetic of the week. Or will it rely more on the mythology that has been established. But as far as the opening episode goes, it was highly enjoyable and I look forward to what comes next.