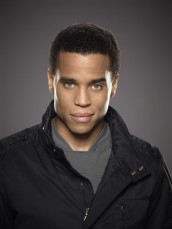 The actor talks playing a police android with emotions 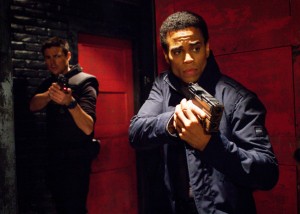 In Fox’s new series ALMOST HUMAN, premiering tonight, before settling into its regular time slot Monday, November 18 at 8 PM, creator J.H. (Joel) Wyman posits a future where the police have plenty of backup. Each officer is paired with a human-looking but depersonalized android partner, who can deflect gunfire, detain suspects and otherwise withstand a great deal of damage.

However, Detective John Kennex (Karl Urban), who has a prosthetic leg, detests the androids and tosses his first cyborg partner out of a moving car. Kennex is then paired with Dorian, played by Michael Ealy. Dorian is a DRN, a type of android no longer found in the field because its adaptive emotional qualities were deemed a hindrance. However, Dorian’s humanity makes it possible for him and Kennex to work together to solve the kinds of crimes that can happen in a world where artificial intelligence is not only the norm, but walks the streets.

Ealy, originally from Maryland, had a stage career in New York before embarking on his screen roles. On television, Ealy starred in two seasons of Showtime’s SLEEPER CELL as an FBI agent infiltrating a terrorist cell, in USA’s COMMON LAW as a cop whose relationship with his partner is so fractious that their captain forces them into couples counseling and in ABC’s science-fiction series FLASHFORWARD, as well as having arcs on CALIFORNICATION and THE GOOD WIFE. Feature credits include both BARBERSHOP movies, MIRACLE AT ST. ANNA’S, FOR COLORED GIRLS, UNDERWORLD: AWAKENING and THINK LIKE A MAN.

At a party thrown by Fox for the Television Critics Association, Ealy cordially takes some time to talk about playing the almost human Dorian.

ASSIGNMENT X: When you got sent ALMOST HUMAN, were you more drawn to the role of Dorian or the project as a whole?

MICHAEL EALY: Probably the role. When I say that, when I got it, I was interested in the project. When I had my first meeting with Joel [Wyman], that’s when it became all about the role. My first meeting with Joel was a three-hour meeting, which I’ve never had before. And in that meeting, I felt his vision, his ability to collaborate, his desire and passion for this show, would be enough to get me through five seasons.

AX: You’ve done so romantic comedies for the big screen. On television, you tend to be cast as these very intense people, in SLEEPER CELL and FLASHFORWARD and COMMON LAW. Dorian is in a serious situation, but he has kind of a mellow, humorous personality. Since you’re playing him over a long haul, was it a bit of a relief that he has a bit of a lighter attitude?

EALY: You know what? COMMON LAW was a comedy, and that was probably one of the hardest things I’ve ever had to do, because you have to be funny [laughs]. So this is actually more in my wheel barrel, in terms of a nice mixture of drama and light comedy.

AX: Is it different playing an android than playing a normal flesh-and-blood human?

EALY: Yes. Actually, as an actor, you tend to draw on your human instincts and your background, what you’ve gone through as an individual. And the hardest things in terms of playing Dorian is to act like I don’t have that and to bring that kind of innocence to him that he doesn’t have the life experience that Karl’s character John Kennex has. He doesn’t have that. So he’s fascinated with that, and he observes it, and he learns from it. Joel and I talked about this from the beginning – “Let’s make him as observant as possible.”

AX: Is it hard to play scenes where your character is consistently being talked down to? Because Karl Urban’s character John Kennex is trying to evolve out of “seeing you as a screwdriver,” as another character says.

EALY: You know, I think once we get out of the pilot, we’ve been through some stuff together and there’s a certain amount of trust that he starts to have for Dorian. And we’ll feel that condescension start to lift a little bit.

AX: Is Dorian able to educate Kennex at all?

EALY: Oh, yes. Mostly by his actions, more than, like, “Today I’m going to tell you how you need to get hold of yourself.” It’s not like that. It’s more like, by example, the way in which Dorian carries himself, I think John starts to see a better side of him.

AX: Since Dorian is an android who is built to handle dangerous crime situations, is this the most physically intense role you’ve had?

AX: Have you had to do anything particular physically or learn anything physical?

EALY: Nothing I haven’t done so far already. So we’ll see. In UNDERWORLD, I had to fly a little bit, I was on a harness and I got yanked across the room. That was probably the hardest thing I’ve ever had to do physically.

EALY: I have a remake of ABOUT LAST NIGHT that will come out in February for Valentine’s Day in 2014 and THINK LIKE A MAN TOO coming out next summer, June 2014, and a small role in LAST VEGAS.

AX: Is there anything else you’d like to say right now about ALMOST HUMAN?

EALY: I really hope people understand what we’re trying to do with this show. It’s not one-dimensional, it’s not all action, it’s not all sci-fi, it’s not all character work. It’s a nice blend of everything. What we’re really trying to define is the line – what is it to be human?