Home » i am zozo movie review 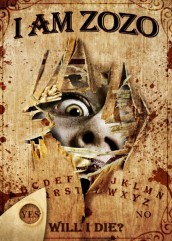 Movie Review: I AM ZOZO

I AM ZOZO has one big plus going in for older horror films fans and/or fans of older horror films: unlike every other ultra-low-budget movie (horror and other) in what feels like forever, director/writer Scott Di Lalla decided to shoot his narrative feature debut on actual film. Yes, it’s Super 8mm, but it looks surprisingly good. Moreover, it has a look that harks back to the ‘70s and early ‘80s, when all kinds of crazy stuff was scaring people in the cinema.

A little more good news is that Di Lalla lets things build quietly. Yes, we are told up front by a title card that this is “based on a true story,” but the tale we are presented with can be taken a number of ways. After two prologues – one showing a Ouija board session going catastrophically wrong, another showing a disturbed young woman, Tess (Kelly McLaren), reaching out for help – we see the body of the story in flashback. Tess is a relatively happy college student who meets up with a group of friends (Demetrius Sager, Caleb Courtney, Caleb Debattista), plus one pal’s new girlfriend Meg (Courtney Foxworthy), for a weekend at a lakeside cabin in the woods.

Meg is a cheerful Goth and self-proclaimed Wiccan who is happy about the upcoming Halloween holiday. She has brought a Ouija board along for the weekend and, despite Meg’s misgivings, invites everyone to play with it. They are contacted by several spirits, including one called Zozo. Plausibly weird things begin to happen.

What’s intriguing about I AM ZOZO is that Di Lalla leaves everything open to interpretation – we can make up our own minds if what’s happening is supernatural or a combination of mass hysteria and tragically bad timing. Certainly there are good builds, particularly when Tess is alone with a flashlight or checking on someone wrapped in a blanket.

There’s also nice camaraderie between the actors and characters; in the non-scary parts, this is a weekend vacation we wouldn’t mind having ourselves. The film was shot in Washington State, largely on San Juan Island, which gives it a fresh look.

The bad news is that Di Lalla hasn’t really found a way to maximize the terror quotient – he blows past a few promising opportunities to make things scarier. Still, he’s good at keeping us unsettled, and it’s a real pleasure to see one of these DIY movies with rich colors and whip pans that don’t break up into pixels.

The opening titles mention that quite a number of people have had unfortunate and perhaps even lethal experiences relating to the Zozo entity; the special features on the disc include an interview with Darren Evans, who says he believes Zozo killed two of his friends. Whatever one thinks of Evans and how he connects the dots of what happened, it’s an interesting chat. There’s also a friendly making-of featurette where Di Lalla and producer Zack Goffman discuss their production choices.

Article: Movie Review: I AM ZOZO