The actress also talks DON'T TRUST THE B---- IN APARTMENT 23 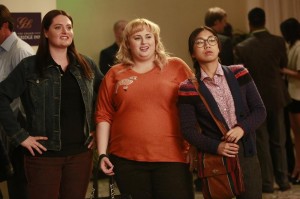 Liza (pronounced “Lee-za”) Lapira has been a steadily working actress for a good while now. She was in twenty-one episodes of HUFF, then appeared in the feature film CLOVERFIELD. The New York-born actress recurred on DEXTER as Detective Yuki Amado, on NCIS as Special Agent Michelle Lee and on two seasons of DOLLHOUSE as Ivy, the assistant to Fran Kranz’s brain machinery scientist Topher. The following year, she was a regular on Fox’s half-hour romantic comedy TRAFFIC LIGHT as a half of a happily married couple, then spent two seasons as a series regular on ABC’s half-hour DON’T TRUST THE B—- IN APARTMENT 23 as Robin, a woman obsessed with her unethical neighbor Chloe (Krysten Ritter).

DON’T TRUST THE B-— ended last season, but Lapira is back on ABC in SUPER FUN NIGHT, Wednesdays at 9:30 PM. Lapira plays Mary-Alice, the most agoraphobic of three lifelong friends – series co-creator Rebel Wilson stars as Kimmie, with Lauren Ash as Marika – trying to break out of their routine of staying home by getting out in the world and having adventures. SUPER FUN NIGHT was nominated for a People’s Choice Award for Favorite New Comedy Series.

Talking about the show at an ABC event for the Television Critics Association, Lapira – wearing a great dress that, she says in a shout-out to the designer, is by Nanette Lepore – sounds like she’s having a fun time with her new gig.

ASSIGNMENT X: Can you compare Mary-Alice in SUPER FUN NIGHT at all to Robin on DON’T TRUST THE B? Mary-Alice seems to feel at least a little more secure in her relationship with the people around her …

LIZA LAPIRA: Yes. There’s no stalker-ism this time, but I’ll say they’re similar in there’s a sense of arrested development. They’re both emotionally stuck at fifteen, the difference being, I would say, there was more of a manipulative, childish quality to Robin. Robin’s kind of crafty and gets what she wants, whereas this is a childlike innocent lamb being led to slaughter. It’s like, “Where are we going? I don’t know.” She’s not worldly. These are three sheltered girls – of the three, she’s the most sheltered.

AX: In TRAFFIC LIGHT, you were actually playing someone who was pretty secure in her marriage, but do you see any similarities between Ivy in DOLLHOUSE and Robin and Mary-Alice, in that with all three of them, they’re people who are paying all of their attention to someone who is sort of exasperating?

LAPIRA: Yes, Topher was like the sun – less so than Chloe. I mean, Chloe really hits the hammer on the nail, but Topher was brilliant and everyone loved him and Ivy revolved around him. With Chloe, I had a mean girl’s obsession with her. She’s like the queen bee and I’ve got a tween-like love/hate, mostly love obsession with that character. I revolve around her. I’m like Kramer meets SINGLE WHITE FEMALE. I’m a neighbor that comes over a lot, and she’s wacky, but she’ll also wear your clothes.

AX: Was there anything sexual in Robin’s interest with Chloe?

LAPIRA: You know, I talked to the writers about that, and I think that the answer is no. Or as much as it would be for a twelve-year-old who is drawn to the most popular girl at school. It’s a very young thing. The writers [were] brilliant. They made in the medical field, she runs the co-op board. She’s a very high-functioning, capable adult and her one Achilles’ heel or addiction, if you will, is Chloe. That’s the one part of her that regresses back to a thirteen-year-old girl. It’s like, “Mommy, let me in!”

AX: Your characters seem to run the gamut from very sexy to very nerdy …

LAPIRA: My first time doing it was right after TRAFFIC LIGHT, where I got to be kind of that. I went into DON’T TRUST THE B, where I got to be completely opposite. For me, it was refreshing to look different and to kind of be gross, so this is a step in a similar vein, except instead of an extroverted kind of nerdy person, she’s a very introverted nerdy person, and I like – I am a nerd in that I like to hide under clothes and wigs and whatnot. I’m into it.

AX: Did it take the SUPER FUN NIGHT people and you awhile to find the right look for Mary-Alice?

LAPIRA: Yes. And honestly, we’re still working through it. I have no vanity, which is probably going to kill my career, because I like the worst that it can be, the bigger the glasses or the more I can hide or transform, I’m into it. So my career is over, is what I’m trying to tell you [laughs].

AX: There’s a lot of very physical comedy in SUPER FUN NIGHT, with people spontaneously breaking into dance moves or even just rolling around. Do you enjoy that?

LAPIRA: It’s fun. It’s like playtime. [Rebel Wilson] was talking about improv – I’ve done it in past shows. TRAFFIC LIGHT was insidiously a lot of improv, as was DON’T TRUST THE B. It’s fun. And Rebel’s really good about being like, “Okay, this time, we’re just going to not say what’s written, and we’re going to dance around.” And then we do it and that’s the take they use.

AX: Do they let you do your own Snoopy dance, or do they choreograph it for you?

AX: Do you actually feel like, as yourself and/or as the character, “I don’t care what this looks like, I’m just going to go for the biggest physical gesture I can make,” or are you thinking, “What would look the funniest?”

LAPIRA: Oh, I think definitely it’s planning ahead for me, at least. I just get into this character’s nerd head space – I think we all do – and just go, “If I stayed home for the last fifteen years, thinking that was a good time, what physical movement would I do now that I let loose?” And I guess that’s what it looks like.

AX: Are there things that you geek out over?

LAPIRA: TEAM OF RIVALS [the nonfiction book by Doris Kearns Goodwin about Abraham Lincoln’s political team]. I was just telling my girls that when that book came out, every Friday night was TEAM OF RIVALS. Goodwin’s such a good historian! See, I’m geeking out. And ice cream. So historical dramatization and processed food.

LAPIRA: [laughs] First of all, I would be extremely flattered that anybody would know who I was [laughs]. I would say, “Mom?” No, I don’t know. I think it’s great. After watching James do it, I would be on board. James has sold me on it. He has a line in one of the episodes where he looks at a spoon in earnest, at his reflection in a spoon, and says, “Do I like myself better upside-down?” I mean, brilliant [laughs]. Yes, I would say yes to that.

AX: A lot of your shows deal with people who have assistants – Ivy was an assistant, Robin wanted to be Chloe’s assistant, Mary-Alice kind of assists Kimmie on some levels. Would you ever want to have an assistant?

LAPIRA: I don’t know how I’d feel about an assistant. I’m still on my Robin track where I think about – I’ve had crazy roommates. That’s the kind of thinking that I have. I don’t go into the assistant realm, but I have had some crazy stalker roommates. Ever since the last one, the latest and greatest, I vowed never to have a roommate again, even if I lived in a shoebox. And I did.

AX: Did you think that any of the stuff with the crazy roommates was funny at the time and something you could use for your acting work, or did that take time and perspective?

LAPIRA: It definitely took perspective, but it informed – the great thing about it is, it informed Robin a lot, because I thought, “What kind of person would stand outside my shower door and listen to me sing and then tell me about it, because I had ‘such a pretty voice,’ and then would yell at me the next day, like, ‘I hate you! You think you’re da-da-da-da-da!’” And then sometimes [the roommate] wouldn’t even sleep there, but the crazy men [she invited over] would sleep there. At the time, it was perilous, but right now, it’s [funny in retrospect].

AX: You’ve just started with SUPER FUN NIGHT, but do you have any favorite moments from DON’T TRUST THE B—-?

LAPIRA: I got to fall off the balcony at James Van Der Beek’s house. That was terrifically fun both to shoot and to see, and I got to see my stunt double do it. I’m giving this great toast to Chloe and she’s loosened the banister so that she could fake fall over it and then sue James for money – that was her genius plan. And instead, I give this great toast and accidentally fall. And still apologize for my waste of space as I’m on the ground and still very gracious and happy that Chloe’s my friend. So I liked that. And then the second thing is, there’s a Hamptons trip and I got to drive a Hummer limousine, because of course, Robin inserted herself into the situation and not only is she the driver, but she gets a limo driving jacket and driving gloves and a hat. I thought it was really funny, the scripts make you laugh before we even get there, and then watching Ray [Ford] or James, Dreama [Walker], Krysten elevate it, it was just so much fun. So I knew the product was good.

AX: Have you done anything else that we should know about?

LAPIRA: Well, I did do CRAZY, STUPID, LOVE, which already came out, but I’m actually promoting in my own mind the deleted scenes of that movie. No one has DVDs any more, but if anyone does, if they could see the special features, there’s some work there I’m proud of. I’m hitting on Ryan [Gosling] and I’m making inappropriate noises, like I’m going for it, and surprisingly, it didn’t make the film [laughs]. I did a cameo on this little indie that Damon Wayans Junior stars in. It’s called SOMEONE MARRY MARY and it’s a very funny script. He’s in it, Lucy Punch and Tyler Labine and I just did a cameo on it, but it was super-fun.

I produced and was in my first short film. It’s called THE HAPPIEST PERSON IN AMERICA. I’m going to geek out a little bit, because we based it on a true story. Some publication did research – there was a Gallup poll on the characteristics that make a happiest person, and they found him in Hawaii. And they interviewed him, and so we did a similar story where a young lady who has just experienced a trauma goes to find the happiest person in America. He lives in Hawaii, and it’s like Dorothy going to the Wizard, being like, “What’s your secret?” And I play that girl, and we produced it. I’m so proud of it – I think the trailer’s up now. The hope is to screen it at festivals, but right now, it is findable on the Interwebs. THE HAPPIEST PERSON IN AMERICA – I think it’s up on Vimeo, and then hopefully it will be wider.

AX: Is there anything you’d like to say about SUPER FUN NIGHT?

LAPIRA: The people are totally fun. We go to work, we play and hopefully it’ll be as fun for everybody as it is for us.