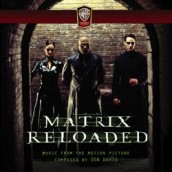 When THE MATRIX appeared in 1999, Don Davis’ score was one of those thunderbolt game changers that pretty much re-wrote the book on sci-fi scoring. Taking the already revolutionary approach of such modern classicist-to-film composers as John Corigliano (ALTERED STATES) and Elliot Goldenthal (ALIEN 3) into the computer reality of bullet time kung fu action, Davis’ use of high-tech electronics and a distorted, brass orchestral writing was a kick-ass head trip that created an oppressively thrilling sense of darkness and defiance against the future’s robot overlords. Davis’ fusion of melody and musical sound design was a classic in every sense of the word and slurred note. So it was only natural that the Wachowskis attempted to turn THE MATRIX into a trilogy. While their ambitions came up short, especially given a movie that was impossible to equal, Davis arguably did himself one better with the second one, especially with the techno beat of special techno guest stars like Juno Reactor and Rob Dougan, whose rave rhythms create a sense of true musical futurism.

At times, THE MATRIX RELOADED is sped up to the point where it crashing computers – no more so when Davis fights Juno Reactor in a wonderfully over-the-top “Burly Brawl,” complete with choral hosannahs for the multiple Agent Smiths. But the highlight of RELOADED‘s incredible fusion of the organic and electronic is the relatively controlled “Mona Lisa Drive,” where Davis’ orchestra dances on top of Juno’s ever-varying beats for one of the longest, and most thrilling car chases ever captured on film. When it comes to the orchestra on its lonesome, Davis gives his music a far greater sense of swirling mythmaking at play here, the score gravely earnest and suspenseful in the face of mechanical Armageddon. For the most part, RELOADED is gloriously loud, clanging stuff, about as close to pure impressionism as you’re going to hear a sci-fi score get, along with a healthy dose of Wagnerian sacrifice that reaches the mythic plateau the film otherwise strives for. La La Land has done a terrific job reloading this new “Matrix” sequel album with every powerful note of Davis’ score, including a slightly less insane take on “The Burly Brawl” and a twenty-minute suite of music to boot. But what just might be the coolest beat is the vocal, and instrumental versions of “Niasierie,” Davis’ brilliant simulation of exactly the kind of smooth Parisian Bossa Nova you’d expect to hear in the private chatroom club of the Eurotrash Merovingian.

Clink on the link to Purchase THE MATRIX RELOADED soundtrack