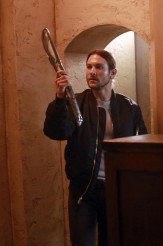 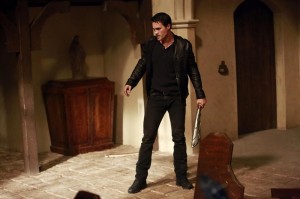 Funny that the opening segment of this week’s MARVEL’S AGENTS OF SHIELD had more superheroes in it than the entirety of the series thus far – and it was all footage from past and current films (namely THOR and THOR: THE DARK WORLD).

That’s a sad state for a show that exists in the Marvel universe filled with … wait for it. Come closer. No, closer. FREAKING HEROES! But at least they have the ability to tap into that footage and use it in some way that ties into the show. Something that hasn’t been done at all at this point either.

“The Well” at the very least had some notion of involving parts of the Marvel universe, sorta, OK maybe not really. This episode could have been just an ordinary science fiction/fantasy plotline about an Asgardian no one has ever heard of for centuries on Earth because he finds life here more enjoyable than working in a stone mine back in his real realm. But because there is a THOR movie out now, hey, let’s get it some publicity and have a story that is completely unrelated to that movie.

They did tie in the THOR: THE DARK WORLD in one way, it showed that Agent Coulson’s (Clark Gregg) team are just janitors in the Marvel universe – just cleaning up the messes that the super powered guys left behind. There was actually a comic book based on this at one point called Damage Control. It was a construction company that came in and cleaned up the mess left behind after superheroes and super villains fought. Not surprisingly, it was far more exciting than MARVEL’S AGENTS OF SHIELD janitorial service.

Compared to the previous episodes, however, this was a vast improvement. We got a continuation of Coulson’s time in Tahiti (although if that’s a nightmare where some chick is giving you a massage, what are his good dreams like?), we got a little more growth in Simmons’ character (Elizabeth Henstridge), for the first time Agent Ward (Brett Dalton) showed some personality and so did Agent May (Ming-Na Wen) and both (presumably) got busy in a hotel room – which I did not see coming but given what they both went through in this episode is understandable. However, I think it is just a one-time thing and trying to swerve the viewers away from this whole Ward/Simmons/Fitz (Iain De Caestecker)/Skye (Chloe Bennet) love, uh, quadrangle thing they got going.

Speaking of Ward, as I said the show finally gave him a personality. He’s been a bump on a log, a stick in the mud, as dull as dishwater, boring to death nearly this entire run so far. To see him actually gain some rage gave him what could be the first likeable trait he’s had on this show. Then he got to beat up some dudes in a superhero type way. Hey, it may not be exactly Avengers vs. Loki but at least it was better than “We have to find this technology and launch to the Sun every week” episode.

I also enjoyed that Ward did not reveal his secret about “The Well” to anyone (well, maybe Agent May if you know what I’m saying) to perhaps be revealed at a later date. I assume he was the one outside the well not the boy trying to lower the rope – or was he the guy who said not to lower it?