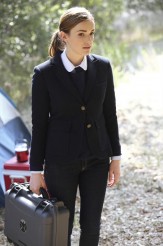 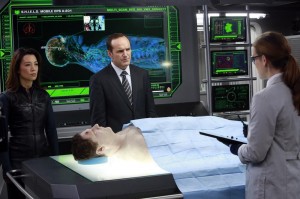 When floating bodies turn up, Coulson and the Agents of S.H.I.E.L.D must hunt down an elusive killer in MARVEL'S AGENTS OF SHIELD | (c) 2013 ABC/Ron Tom

Was I the only one cheering for Simmons (Elizabeth Henstridge) to actually take the long kiss goodbye on MARVEL’S AGENTS OF SHIELD?

Don’t get me wrong, I would have rather had Fitz (Iain De Caestecker) go because well, I’m a dude and all so I naturally would prefer watching the hot female. However, both characters have been really annoying and easily replaceable as the Q of the SHIELD universe. “FZZT,” which is obviously a play on the character and the electric virus that was carried over from the attack on New York from THE AVENGERS, was actually the first episode where we got something interesting from the duo.

Up until now, they have been the save-the-mission-at-the-last-minute stereotypical characters that have been part of the problem of this show.  But, naturally, they saved her at the last moment and how about that ending? Like really, Ward (Brett Dalton) jumps out the plane and skydives to her and injects her with the last second drug to save her and boom all is well again in the world.

Could this show be any more contrived? This is what is wrong with this show in a full episode of badness. They track a bunch of firefighters because they keep dying so they suspect a super powered bad guy is doing the deeds. But it turns out they are just unlucky and were cleaning a trophy they took from the battle of New York. But the virus passes through touch and Simmons gets it only to be saved at the last minute once again by the technical wizards.

Instead, we get this. Another throw-away episode that does nothing to further the mythology of the show and does nothing to endear ourselves to the characters because they are carbon cutouts of numerous characters on numerous other dramas across networks.

The only thing that’s interesting about this show is the anti-SHIELD group Centipede (nowhere to be found in this episode) and what’s going on with Coulson (Clark Gregg). Now we did get some interesting things about him in this episode including his self-test in order to find out if he was any way different from the person he thinks he is. It shows that he thinks that something was done to him – and it harkens back to the first episode when Maria Hill said he “must never know” the truth. So that’s still interesting and a good subplot. But that’s it really.

While there have been some good things going on that might be a prelude to other things happening later in the season, so far, MARVEL’S AGENTS OF SHIELD has been milquetoast at best.