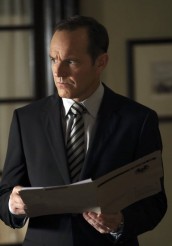 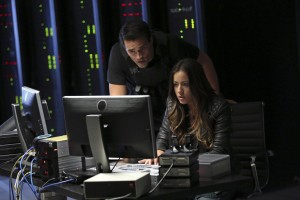 Now this is what we have been waiting for from MARVEL’S AGENTS OF SHIELD.

A dude with a nasty fire power, secrets, revelations, a deeper subplot into the anti-SHIELD organization known as Centipede all wrapped in a pretty good episode called “Girl in the Flower Dress.” The girl happens to be a nasty piece of work that’s all pretty on the outside, a complete sociopath with a wicked tongue on the inside.

Centipede is the same organization that was the focus of the “Pilot” episode where they were injecting individuals with a serum in order to heighten their super powers to extreme levels. The only problem is that too much of the serum makes them go boom.

When a S.H.I.E.L.D. agent in Hong Kong goes off the grid and just happens to have a super power to control fire, he’s persuaded by the Girl in the Flower Dress to accompany him in order to reach his full potential and become “Scorch” – a name given to him by the woman in order to get him to cooperate and feed his ego.

However, Centipede has more than just a helpful interest in the agent and wants his blood in order to serve the greater master plan of the organization – we don’t yet know what it is but it obviously isn’t for the good of the people. So the S.H.I.E.L.D. team goes in to rescue him but when they free him he goes bananas and loads up on the serum and turns into a dark villain killing the scientist chick we saw in the first episode and trying to take out Coulson (Clark Gregg) and May (Ming-Na Wen) which leads to explosive results.

Meanwhile, believing that Skye (Chloe Bennet) isn’t exactly a team player they set her up when they find out a Rising Tide hacker gave away the information of Scorch to the girl in the flower dress. We learn that Skye has a boyfriend – well by the end of this episode not anymore – and that he was the one she sent the message at the end of the “Pilot” episode to indicating she had infiltrated S.H.I.E.L.D. Of course, Coulson is none-too-happy about this and blames himself for letting her into the group despite the warnings of May and Agent Ward (Brett Dalton).

By the end of the episode, Coulson has attached a bracelet to Skye limiting what she can do on a computer and learning that the real reason Skye was trying to get close to S.H.I.E.L.D. was in order to find out where she comes from – the only clue she has is a redacted memo about her past. Coulson warns her that she may not like what she finds, and Skye retorts that anything is better than what she is going through right now.

With the end of the episode focusing on Centipede and the deeper part of the organization and at least a hint to some of their goals, this storyline could continue to be one of the better aspects to the show if done correctly. Let’s hope this begins a series of good episodes and fulfills what this show could be.