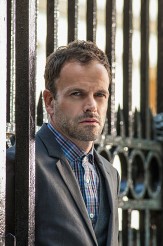 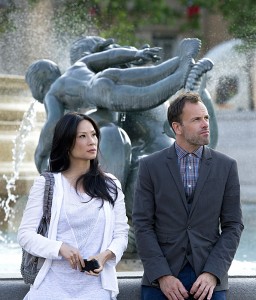 ELEMENTARY, now in its second season on CBS at 10 PM on Thursdays, continues to tell the story of police consultant Sherlock Holmes, played by Jonny Lee Miller, and Joan Watson, played by Lucy Liu, as they solve crimes in contemporary New York City.

Robert Doherty created this iteration of Sir Arthur Conan Doyle’s famed detective. This interview is a combination of comments he made at the Television Critics Association press tour and a one on one conversation with Assignment X about several aspects of ELEMENTARY – including why he feels he doesn’t want to look at any other versions of Sherlock while his show is on the air.

ROBERT DOHERTY: The current iterations that are out there – the terrible punishments you end up inflicting on yourself are not watching them. And it’s a drag. I would love, love, love to watch the BBC show, but I think – it’s not that it pollutes you [laughs] – it does in a sense, but once you’ve seen something, it’s hard to unsee it. And so I try to steer clear, just because I want to see what comes out of my head. I want to continue to work on who our Sherlock is, who our Watson is, what can we do in New York, what’s Gregson’s [Aidan Quinn] story – all of these things. I hope many, many years from now, when ELEMENTARY is no more, I will have this treasure trove of great Sherlockian material to dive into.

ASSIGNMENT X: Sometimes your Sherlock embarks on very articulate anti-capitalist speeches. Do you have to temper how much social observation you put into an episode, or do you feel like you can just go for it?

DOHERTY: It’s funny. More often than not, I feel we can go for it, because at the end of the day, people recognize Sherlock’s quirkiness, they recognize he’s a curmudgeon and a misanthrope and as far as writing the character goes, it makes it a little bit easier for me. It makes it easier to have him rail against certain institutions. Some people may take it very seriously; I think others see that more often than not, it’s really for the sake of humor and quirkiness. But again, it’s one of these things that’s just fun to write.

AX: How did you come to do ELEMENTARY?

DOHERTY: I was always a huge fan of the character. It’s hard not to be. I’ve spent most of my career writing for genre shows [STAR TREK: VOYAGER, DARK ANGEL, TRU CALLING]. My longest stint was a show called MEDIUM, which had a supernatural aspect to it, but at the end of the day, had a procedural engine. This felt like a very natural fit. I mean, there’s nothing supernatural in this show, and yet Sherlock is unlike anyone any of us know or will ever know.

As far as the genesis of the project, Carl [Beverly, fellow ELEMENTARY executive producer] is somebody that I’ve known for awhile, and we would meet every once in a while to kick potential projects around. We were probably three meetings and I think we were just wrapping up when Carl had said he’d been thinking about Sherlock Holmes in New York City, “an Englishman in New York,” that sort of vibe. I was immediately attracted to the idea, again, because I’ve always enjoyed the character, but I also as a fan know that, because Sherlock lives in the public domain, he’s been through many, many, many hands. I think that’s actually one of the upsides to the character. I think if so many people couldn’t put their own spins on it, handle it at some point, I don’t know that he would exist in popular culture the way he does. So I was intrigued, but if we were going to do this, I also wanted to make sure that I had my own take on it. I wanted to make sure that Carl saw it as well and Sarah [Timberman, fellow ELEMENTARY executive producer] saw it as well. It took a little time. You want to go down in your bunker and hide yourself from everything else that’s ever been done and go look at the source material.

AX: What makes Sherlock Holmes different from other detectives on the page and on the screen?

DOHERTY: For me, it’s funny. I feel like I turn the dial on my television, I see Sherlock everywhere. I see his fingerprints on almost every procedural show. Not every one, but most shows have a Sherlock in them. They just happen to be called something else. What we have is a name that means something and a franchise that means something and a mythology that people treasure and value. So for us there’s a lot, again, that comes along with the character. It seems foolish to not take advantage of the relationship that was built in the books, to not take advantage of the spirit of the smart source material. It’s amazing work. It’s these stories and characters that were – I don’t know if it’s that they were a century ahead of their time, or it just happens to be a paradigm that works no matter where you are, wherever the character is. Having always been a fan of the character, I’ve now seen him in the present, in the past, in the future, in comics, in books. It tends to work. Conan Doyle knew what he was doing.

AX: How do you and the other writers construct scripts on ELEMENTARY?

DOHERTY: We have several writers, and everybody comes at it a different way. Speaking for myself, I try to start from the reveal – what’s the big twist, what’s the thing that nobody’s going to see coming, and now what can I do for three acts to sort of build to that? And if you can’t get there, then it’s not worth it and you throw it away. I’d say it’s one of the more complex shows I’ve had to break because of the deductive reasoning, the observational aspect of the show, the deductive aspect of the show, and that’s another way to come at an episode. Sometimes, somebody goes, “I know exactly how to use these clues to get to the following deduction.” And again, you try to cobble a story up around that if you can. Other times, we’ll know what the case is and what the B story is and we’ll leave little spaces, we’ll leave some deductive science here – we come back to that and do it towards the end.

AX: Do you try to write for what you see Jonny Lee Miller and Lucy Liu doing with their characters?

DOHERTY: As far as what I saw on screen and tried to write to – I don’t know that “chemistry” is a strong enough word. I don’t know that it encapsulates what I saw. But most immediately, you enjoyed seeing them together. And that was huge. That was crucial to the success of the show, or at least to the degree of success we’ve had to this point. What I saw was a lot of humor. I saw that each could go toe-to-toe with the other. You can’t help but write to those things. I had a sense of who Sherlock and Joan were on the page, but it changes in a big way when you get not just actors reading your lines, but tremendous actors who always surprise you. I’m blown away by almost every cut that ends up coming in. There are certain things I don’t get to see until something’s been actually pasted together, and it’s always a pleasure.

AX: It’s been reported that you were asked to tone down the chemistry between Holmes and Watson, lest it seem romantic …

DOHERTY: To the best of my recollection, I don’t remember getting any sort of call about that, that there was too much chemistry. If anything, everyone was really reacting to the fact that they felt like partners. They felt like two people who were smart and interesting, and one was able to keep up with the other. I’ve said from the very beginning, people will always anticipate that [romance]. There will be many people desirous of that. They’ll want to see it. There will be an expectation. We love to defy expectations on this show. When we look ahead five, six, seven years, I honestly can’t say. I can tell you that, for as long as I’m a part of the show, it’s not something that I will want to see, mostly because I don’t think we need it. And when you look again at the relationship in the original books, the original Conan Doyle canon, they didn’t need to get together. They did quite nicely. They managed to tell many fascinating stories. So I’d like to apply that thinking to this show for as long as I possibly can.

DOHERTY: Right. It’s funny. My very first job out here was STAR TREK: VOYAGER, and that was the first time that I was exposed to it. There was a passionate subsection of the fan base that was trying to match various crew members up with the rest. I love their passion, I totally get it [laughs]. STAR TREK prepared me for rabid fandom, so it’s served me well in this job.