Home » once upon a time in wonderland interview sophie lowe 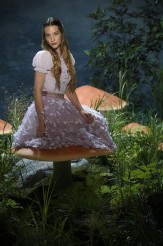 Interview: Sophie Lowe goes down the ONCE UPON A TIME IN WONDERLAND rabbit hole

The actress talks about playing Alice as a romantic action heroine 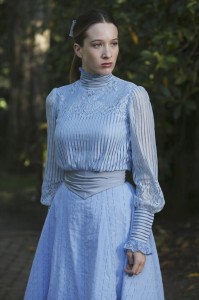 ONCE UPON A TIME IN WONDERLAND, on ABC Thursdays at 8 PM, takes place in the same overall universe as ONCE UPON A TIME, but it’s very much its own story. Created by ONCE inventors Edward Kitsis and Adam Horowitz, along with Zack Estrin and Jane Espenson, WONDERLAND gives us an Alice, played by Sophie Lowe as a young woman, who has found true love in Wonderland with Cyrus (Peter Gadiot), the Genie of the Lamp. When Alice wrongly believed she’d seen Cyrus die, she went back to her version of England, where doctors are threatening to lobotomize her into renouncing her belief in Wonderland. However, Alice is rescued by the Knave of Hearts (Michael Socha) and the White Rabbit (voiced by John Lithgow) and brought back to Wonderland to search for Cyrus, and – it’s hoped – overthrow the reign of the malicious Red Queen (Emma Rigby). Meanwhile, the magician Jafar (Naveen Andrews) is maneuvering to once again control the lamp, so there’s quite a lot happening once upon this time in WONDERLAND.

The twenty-three-year-old Lowe has made a number of feature films, including playing the title role in BEAUTIFUL KATE and appearing in the horror feature ROAD KILL; she was also a series regular on the Australian THE SLAP. WONDERLAND is her first American-produced, Vancouver-shot job. The actress is at ABC’s day at the Television Critics Association press tour, first on the Q&A panel for WONDERLAND alongside her cast mates and the series creators, and later makes herself available for a more informal conversation at a party. This interview is a combination of both, with Lowe talking about playing Alice in WONDERLAND.

ASSIGNMENT X: When you came in to audition for WONDERLAND, did the producers tell you what sort of Alice they wanted you to be?

SOPHIE LOWE: Well, it’s kind of just written in the script what the character’s like, and I just went in to the audition and did it the way that I thought it was written. And I guess they liked it [laughs].

AX: Did you audition alongside any of the other people who wound up being cast?

AX: You were born in Yorkshire, but you’re Australian …?

LOWE: I’m Australian. I’m originally from England – I moved to Australia when I was ten, so I’m half and half. My family is in Australia. So I miss my family.

LOWE: I think they’ve both got their own challenges, especially because in the Victorian times, she’s so misunderstood. She’s a different person there – she’s broken down and no one believes her. She’s not herself there – she can’t be herself, because no one will let her be that. So there’s a sad depth there, but in Wonderland, this whole other person comes out and she’s more confident, she’s got her love there, so I get to play two characters in one, which is really fun. [In Wonderland], she’s tough mentally and physically, and she can kick ass and look after herself.

AX: Did you have to learn how to do anything physical, like how to kick people or how to take a punch?

LOWE: Yeah. I had some training, but I’m getting more training now. I’m still learning as I go, but I did a little bit of martial arts when I was younger, so that kind of helped. And my brother’s really good at martial arts, so he taught me some stuff.

AX: How is it working with all of the CGI elements in the production?

LOWE: The whole filming process to me is so exciting. I’ve never done green screen before, and so the whole experience, I just want to take it all in and am enjoying every bit of it.

AX: Is coming to Los Angeles and getting work here – granted, you shoot WONDERLAND up in Vancouver – at all comparable to falling down a rabbit hole?

LOWE: It was. My first time to L.A., I was eighteen, and I was by myself, probably a bad idea, because I didn’t know anyone. It was all scary. But you know, you get the hang of it. One thing that was hard for me was doing an American accent. That was very weird, doing all of these different accents. But now, I get it. I think it takes awhile to understand L.A., but I feel like I get it now. [Doing WONDERLAND] is surreal. My dreams have come true, basically. I’ve wanted to play a role like this and be in a show like this. I’m very blessed to be a part of this family. But it’s a crazy roller coaster.

AX: Are there any jokesters within the WONDERLAND cast?

AX: Was ALICE IN WONDERLAND in any form – the original Lewis Carroll book, the Disney movie, a stage production – part of your life growing up?

LOWE: My mom actually read it to me when I was a little girl. It was a big part of my childhood. I loved it. It’s funny as well, because it’s the only book my mom had as a child, it’s the only book she was allowed to read. She grew up in England in a tough town, and they didn’t have much money, and she could only afford one book, and that was ALICE IN WONDERLAND. So I think that’s really strange – now I get to play like her childhood is coming to life in front of her as well. So it’s a big part of our family.

AX: What do you think it is about ALICE IN WONDERLAND that makes it such attractive subject matter for film and television makers in seemingly every generation?

LOWE: I think ALICE IN WONDERLAND has such a sense of adventure and I think that everyone now and again makes up their own Wonderland in their head to escape, and I think that’s why Wonderland’s so exciting, because I think people with there were somewhere like that to just go crazy.

AX: Did you have your own Wonderland in your head when you were a kid?

LOWE: Yeah, I definitely had my own Wonderland. I live in a fairy tale [laughs].

AX: Given that elements of the Disney ALADDIN are part of WONDERLAND, did you have any feelings about ALADDIN growing up?

LOWE: ALADDIN was one of my favorites.

AX: Do you like the idea that the first season of WONDERLAND is a closed-ended story, that you know where it’s all going?

LOWE: Yeah. I think that’s really important to build the characters and try to make people really fall in love with the characters. If it does well, I have fingers crossed that people like it and I’m very open to it continuing [in a second season].

LOWE: Yes. I just finished a film here in L.A. actually – it was my first film in L.A., so I was really excited about it. It’s called WHAT LOLA WANTS.

AX: Anything else you’d like to say about WONDERLAND?

Article Source:Assignment X
Article:Exclusive interview with ONCE UPON A TIME IN WONDERLAND actress Sophie Lowe