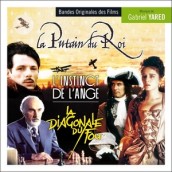 One of France’s great melodists, Gabriel Yared’s impossibly lush, romantic scores like Oscar-nominated THE TALENTED MR. RIPLEY and Oscar winning ENGLISH PATIENT have recalled such melodic masters as Mozart, Beethoven and Schubert. So one can imagine the spot-on results when Yared truly climbs into those costumed shoes when the assignment asks for that style, which is the theme of this splendid three-for release from the French label Music Box Records. First up, it’s hard to imagine a more blunt title than THE KING’S WHORE  a very good bodice ripper from 1990, with Timothy Dalton employing all of his dashing, royal swagger on Valeria Golino’s countess to tragic effect. Yared’s swooningly thematic score is resplendent in 17th century orchestral and harpsichord finesse, adapting Schubert for a lovely chanson, whirling about in Baroque dance and pounding with regal anger. Like the best scores in the genre, Yared uses the music of the aristocratic jet set to reveal a class-free sense of anger and bottled-up anguish.

The tone is even more anguished for chess games of 1984s DANGEROUS MOVES as Yared takes a violin-topped, Schubert-ian tone for a Cold War game between a Soviet resident and a younger dissident refugee, music that also reflects the latter’s Jewish heritage as dark string writing turns the board into an intimate, nerve-wracked battlefield. Even when given the expanse of the war zone of the WW1 skies for the 1993 film ANGEL’S WING Yared takes a similarly personal approach for another collaboration with MOVES director Richard Dembo. Embodying a haughty French flying ace and the squadron who hates his lack of esprit de corps, Yared uses expressive winds and a forlorn piano to poignantly downbeat Baroque ends, with tarnished refinement once again embodied through waltzes. For a composer who’s one of his art’s class (and classical) acts, this Yared triptych shows off a musician who was born ahead of his time, and well before it as well.

Clink on the link to Purchase THE KING’S WHORE soundtrack