Home » Revolution review Everyone Says I Love You 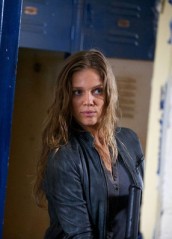 TV Review: REVOLUTION – Season 1 – “Everyone Says I Love You” 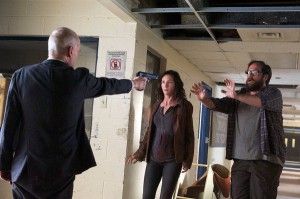 How many hands believe that Charlie (Tracy Spiridakos) is the actual daughter of Miles (Billy Burke) and not Rachel’s (Elizabeth Mitchell) husband from the first season of REVOLUTION?

It sure seems like it could be a possibility given the latest flashback was six years prior to the black out. If we add the 15 years after the blackout where the series currently takes place, Charlie is about 21 (22 if you add in the six months from season to season). I’m calling it. Miles is the daddy. I don’t necessarily have a problem with it since he has taken that father figure type image on, but it is pretty standard fare for dramas.

“Everyone Says I Love You” had a double meaning when it comes to the title. Obviously in the flashback Miles refused to say the words to Rachel despite it being written on his face. And Aaron’s (Zak Orth) girlfriend, Cynthia (Jessica Collins), had to say it right before getting shot in the heart by the evil Dr. Horn (Zeljko Ivanek), who was trying to unlock the secret to Aaron’s supernatural powers in order to heal himself from a tumor in his head.

The power was at the center of this episode as we learned just where it comes from and why Aaron has been able to do the things he has done (including being raised from the dead). It turns out that Aaron wasn’t actually doing the deeds but the nanotech has come to life and developed an intelligence of its own and was acting out the will of Aaron. If he thought kill, the nanotech killed. If he thought heal, they healed – in this case Cynthia.

The nanotech took the form of a small boy, a friend from Aaron’s childhood, and it acts like a small child in the way it speaks and obviously from its actions. Just doing whatever the person that “released” them told them to do. While I understand the need to create some sort of a face to the nanotech, it was weird having a child that no one else could see being the “host” or whatever. In a lot of ways it doesn’t make sense, but probably this whole supernatural storyline doesn’t, but at least we got some answers, which is more than can be said for some shows.

As fall finale’s go, this wasn’t the greatest way to end it. Yes, the whole Miles being sick thing is a cliffhanger but we also don’t have much direction other than the group fighting against the Patriots and their plans. We don’t have much to go on besides that and the whole nanites thing might be wrapped up although I guess they could revisit it at some point. But where would it go now that the cat is out of the bag? I guess ultimately, Aaron could command them to turn the lights back on but since they left him after he begged them to leave, he might not have that ability.

We will have to see when the show returns in the winter.