Home » peter gadiot exclusive interview once upon a time in wonderland

Exclusive Interview: Peter Gadiot is the genie of ONCE UPON A TIME IN WONDERLAND

The actor talks playing a genie in love 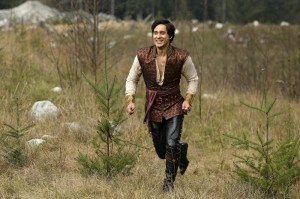 In ONCE UPON A TIME IN WONDERLAND, ABC Thursdays at 8 PM, Sophie Lowe’s character Alice and Peter Gadiot’s character Cyrus, the Genie of the Lamp, are in love. They’re also on the run from both the Red Queen (Emma Rigby) and ALADDIN’s magician Jafar (Naveen Andrews).

While WONDERLAND very likely marks the first time Alice and the Genie have been a couple, it turns out this isn’t the first time English actor Gadiot [pronounced “Gad-ee-oh”) has had a go-round with ALADDIN material. At a party thrown by ABC for the Television Critics Association, Gadiot explains how it is he has “supernatural entity” already on his resume, as well as talking more about his romantic magic worker.

ASSIGNMENT X: Have you ever played a magical being before?

PETER GADIOT: You know what? I have. Actually, I’ve played a genie before.

GADIOT: In ALADDIN. You know, in England, we’ve got pantomimes. We did a pantomime of ALADDIN years ago, and I played the Genie.

AX: Was that Genie similar at all to Cyrus?

GADIOT: No, not at all. Pantomime is very much fun and wild and huge physicality. This is very much more grounded in reality, actually, in terms of this character.

AX: Had you seen the Disney ALADDIN and/or the Genie of the Mirror that Giancarlo Esposito plays in ONCE UPON A TIME?

GADIOT: I was aware of the genie from ONCE, purely because I saw his photo when I went for the costume fitting, but I hadn’t seen those episodes. And the Disney ALADDIN, in which Robin Williams was the genie, of course, I’ve seen that multiple times, and actually [laughs] – I come from the theatre where we really like to research and get all these things. So of course, I watched ALADDIN for this role, and I don’t think it’s very applicable, actually, but it’s fun.

AX: So your character Cyrus is not a jokester in that way?

GADIOT: Well, here’s the thing – so far, he isn’t. Hopefully, he will have that element. It’s not my choice – ultimately, it’s down to the writers, but I’m very much hoping that we can get a bit more lighthearted irony and that side which isn’t so earnest.

AX: Is it love at first sight with Alice? Does he see Alice before she sees him?

GADIOT: No, they see each other at the exact same moment, pretty much, I think, when she breaks into his bottle. She’s just so different, and Cyrus is a prisoner and she just goes against the convention, and he’s just like, “Wow, this person’s different,” and they hit it off, they’ve got a spark. You know, there’s a chemistry.

AX: Which would you say is stronger for him, his genie-ism or his love for Alice?

GADIOT: I think what’s most important is this love that he finds, because I think his state is one of being a genie, but what he discovers with Alice is love, and that’s what he seeks and reaches for and ultimately he has to fight to maintain.

AX: Now, it seems like Cyrus trapped, but on the other hand, he’s a genie. What can anybody do to him, really?

GADIOT: Here’s the funny thing – it’s so ironic. The genie in Wonderland and all the realms is the most powerful being there is. He has cosmic power. He can literally morph things and transform anything, but at the same time, he cannot use any of those powers for himself. He’s purely at the beck and call of his master. So it’s a funny thing.

AX: How is it working with all the green-screen and CGI involved in the production?

GADIOT: That’s the thing. You can’t really judge what you’re doing and you’re suspended on some platform, so you can’t look at the monitor or have any feedback. It’s literally, you have to trust the director, and oftentimes you don’t get a lot of feedback, so what you do ends up on the screen.

AX: There are a lot of British actors in the WONDERLAND main cast – you, Emma Rigby, Naveen Andrews, Michael Socha as the Knave of Hearts, and Sophie Lowe is Australian/English. Are you all sort of banding together as British people working in Vancouver?

GADIOT: Yeah, a bit. Canadians, I have to say on record, are really cool people. They’re very friendly, super-nice. But yeah, we’re getting used to it and we’re boys as well and we want to go out occasionally. We’re like, “Oh, how do we find out this?” So me and Michael are being English lads. It’s good that we have that.

AX: Do you have any other projects going on at present?

GADIOT: Well, I’ve wrapped the third series of a U.K. TV show called FRESH MEAT, and I play a major new character in that, and that’s actually a BAFTA Award-winning show. His name is Javier and that’s a different-toned show. It’s more of a comedy, but it’s a dramedy, really. That’s going to be really popular in the U.K. Hopefully, it might reach over here. I’ve also done a movie called THE FORBIDDEN GIRL, which is a 3D supernatural thriller, and I play the lead in that. It’s a European independent film, and the release date is to come.

AX: And is there anything else you’d like to say about ONCE UPON A TIME IN WONDERLAND?

Article Source:Assignment X
Article:Exclusive interview with ONCE UPON A TIME IN WONDERLAND actor Peter Gadiot