once upon a time in wonderland exclusive interview zack estrin 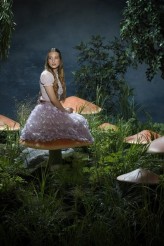 Exclusive Interview: ONCE UPON A TIME IN WONDERLAND co-creator Zack Estrin chats spin-off 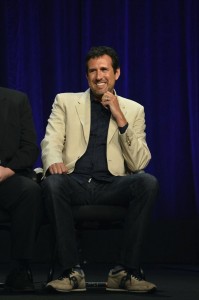 Wonderland, the absurdist magical realm originally created by Lewis Carroll in ALICE IN WONDERLAND, has already been visited by the characters in ABC’s ONCE UPON A TIME. This means that viewers of ONCE UPON A TIME IN WONDERLAND, the ONCE spin-off that premieres Thursday, October 10 at 8 PM, will have seen the place before, but the characters are all new. Alice (Sophie Lowe) is trapped in an England where no one believes she’s been to Wonderland – and she’s desperate to return so she can rescue her true love Cyrus (Peter Gadiot), who is the Genie of the Lamp, a prisoner of Jafar (Naveen Andrews). Yes, there are some ALADDIN folks in here, along with the Red Queen (Emma Rigby), the Knave of Hearts (Michael Socha), the White Rabbit (voiced by John Lithgow), the Hookah-Smoking Caterpillar (voiced by Roger Daltrey) and many more.

Following a Q&A session for ONCE UPON A TIME IN WONDERLAND at the Television Critics Association press tour, Estrin elaborates on his adventures working down the rabbit hole.

ASSIGNMENT X: Do you prefer working in genre?

ZACK ESTRIN: Do I prefer genre? I prefer difference. And I don’t know whether that’s genre or not, but I prefer not doctor/lawyer/cop, I prefer big swings and I’m happy that network TV is starting to take some.

AX: How did you become involved in ONCE UPON A TIME IN WONDERLAND? Was ABC looking to find you another show after ZERO HOUR, or …?

ESTRIN: Adam, Eddie and I have been friends for awhile and have always been talking about a way to work together and when this opportunity came up, a chance to write a show with no handcuffs like this, where literally anything is possible, where no matter what you dream up as a writer – I mean, how do you say no to that? So we sat down together and came up with this crazy world.

AX: Are you and Jane Espenson co-show-running WONDERLAND?

ESTRIN: Jane is serving masters on both shows [ONCE and WONDERLAND]. In a way, she’s our own genie. So she will split time between the two shows. She loves to write, nothing more than that, so she’ll just be the genie in the bottle. 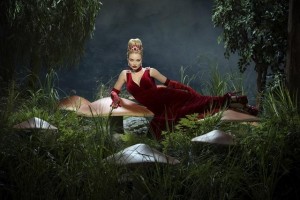 AX: So you’re the show runner on WONDERLAND?

AX: Was ALICE IN WONDERLAND/ALICE THROUGH THE LOOKING-GLASS beloved subject matter for you before this?

ESTRIN: It actually was something that my dad instilled in me from very young. He’s always loved that story because of the metaphors that it contained, because it’s really a story about being a misunderstood child, and being a child trying to grow up, and things are happening to your body – you’re getting bigger, you’re getting smaller. It’s beyond just a story, it’s also a metaphor for a child getting older and how you deal with adults. “How come adults are making no sense? They’re speaking nonsense.” So it taught me early on to look beyond just what the words were, that there are deeper meanings within this stuff, and we want to tap into that with this show as well, much in the way that BUFFY was a parable for a young girl and her first encounter – she sleeps with a man for the first time and he’s a monster. And that’s, I think, a great world to play in.

AX: You’ve been on a lot of shows with fantasy elements, but arguably WONDERLAND is the most special effects-heavy show you’ve done. How do you work with all the effects?

ESTRIN: You have great help. You have [fellow WONDERLAND executive producer] Steve Pearlman up in Canada, who does ONCE UPON A TIME also, he’s a fantastic aid for us up there. And you couldn’t really do this show before this technology was possible. Now we dream up something – if we say, “Hey, we’d like these characters to fall into a Mallow marsh, which is a lake with marshmallow, can we do that?” “Yes!” Ten years ago, you couldn’t do that – you’d be sitting there with a sheet over a trampoline. Now you literally can come up with this imaginary world and it allows us as writers to do almost anything that we want.

AX: Did working on ZERO HOUR prepare you for this at all?

ESTRIN: Only in the sense that it’s a big, challenging television production. We had a little bit of CGI on ZERO HOUR, but hopefully on this show, we’ll have a little bit more success.

AX: Is there a lot of darkness in WONDERLAND?

ESTRIN: There are all kinds of evils in the world on this show. We have these fabulous villains that we get to create out of fiction, not reality.

AX: I don’t know whether Robert Carlyle’s ONCE character, Mr. Gold aka Rumplestiltskin, was originally intended to go from being a villain to a major audience heartthrob, but he has. Obviously a lot of people still think romantically about Naveen Andrews LOST character Sayid, so is there that possibility for Jafar?

ESTRIN: Jafar’s going to be our delicious bad guy of the show. You want to have that person who you love to hate. I did PRISON BREAK for four years – we had this character, T-Bag, who was the delicious villain who was so much fun to write.

AX: I hope Jafar is not going to be completely like T-Bag, since T-Bag was a rapist and murderer with a history of abusing children. That would be really dark.

ESTRIN: [laughs] Yes. But [Jafar is] going to go to extreme lengths to get what he wants in this show and you’ll see – the people who love Rumple, I think, will find a lot of what they love in this character as well. I think the mot interesting characters always have other layers. I think anybody who writes a bad guy who’s strictly just a bad guy – even Iago, who tries to pretend – “I did what I did, and that’s all you need to know” – comes from a place of pain. The most interesting villains for us to write are ones that have their own back stories, and as you know from [the work of Kitsis and Horowitz on] ONCE and LOST, nobody is exactly who they seem. Nobody was born in Wonderland, so who were they and what did they do before this story started?

AX: Are there any native Wonderlandians?

ESTRIN: I’m sure that much like this country [the U.S.], people are born here and also people immigrate. So I think that you will discover a little bit of both as we go along.

AX: How easy or hard is it to work in a mythology like WONDERLAND, where so many things are possible?

ESTRIN: It’s a world of imagination. I think it’s quite often harder to get into the world of a law show or a hospital show where there are rules and regulations. This is literally anything. It’s about emotion and character – I keep saying there are four words that every episode should have, which are emotion, romance, adventure and comedy. If we hit those four things in every episode, we’re going to be in great shape.

Article Source:Assignment X
Article:Exclusive interview with ONCE UPON A TIME IN WONDERLAND co-creator Zack Estrin