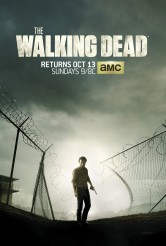 Things start a bit slow, but the pace picks up very quickly 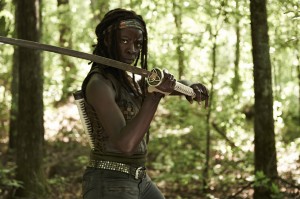 With a show like THE WALKING DEAD, change is expected and almost necessary in order to keep a show fresh and interesting. After last year’s exceptional storyline involving the competing communities of Woodbury and the Prison, it would make sense that the series would move forward.

It’s done that almost with the Season 4 premiere “30 Days Without An Accident”, but it also feels more of the same as Rick (Andrew Lincoln) and his former compatriots have created a blended community of Woodbury outcasts and newcomers to form something new. Yes, walkers are still hanging out by the fence waiting to take out the living, but there’s not a council that makes decisions, Rick has become a better father and taken a step back as leader and there’s even some farming that is bringing in fresh fruits and vegetables for the residents.

Love is also in the air for many of the residents, plus  it looks like something is happening between Carol (Melissa McBride) and Daryl (Norman Reedus).  There’s also a whole bunch of newcomers that prove to be Red Shirts by episodes end as they end of walker fodder or walkers themselves.

While the first half of the episode is predominantly character development (new showrunner Scott M. Gimple claims this year all the major characters get a storyline), the second half turns into a great walker attack. While getting supplies at a Big Lots-type store, the zombies on the roof of the building crash through and start attacking in fresh and unique ways.

And back at the prison, a resident looking like Harry Potter collapses in a shower because of a sickness and transforms into a walker. How? Well, it’s pretty clear, even the fresh meat they’re eating now carries the walker virus, or something along those lines.

Even though is appears Rick is coming back to the land of the living, he still is so screwed up, and frankly, it’s starting to get rather annoying. Heal dammit. Heal! And stop being a martyr. Rick does get an interesting aside as he tries to help a woman he finds in the woods. She needs to bring back food for her husband, but what she meant was bringing Rick back to feed her husband who is a head in a burlap sack.

It’s a crazy little sequence, but it provides some great insight into where Rick stands as a resident of the prison and as the cautious leader he always will be.

“30 Days Without An Accident” is not a perfect episode. And after last season, it’s going to be hard to top, but it’s a solid, character building season premiere that delivers some zombie goods and hints at the bigger picture of where Season 4 will be heading (and hopefully that will mean out of the prison real soon).

Related:Exclusive Photos from the WALKING DEAD at PaleyFest 2013