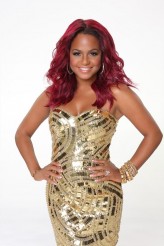 DANCING WITH THE STARS Season 17 – Week 5 Recap Shocker: Christina Milian is out! 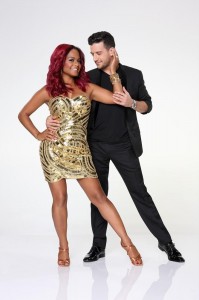 Wow! This was the most surprising elimination in many seasons past. Christina Milian and her partner Mark Ballas were ousted off the dance floor tonight on week five on DANCING WITH THE STARS. The bigger shock was that Leah Remini & Tony Dovolani and Bill Engvall & Emma Slater made it through to week six. No one would have predicted Milian’s exit so soon in the competition. She, along with Ballas, tied for first place tonight with Corbin Bleu & Karina Smirnoff. Remini came in last with a paltry 22 while Engvall was second to last with a 24.

This is  key reminder of how important the audience is in the voting process. Ballas realized it many seasons ago when he and Sabrina Bryan were eliminated far too soon. Tonight, sadly, he feels the pain yet again.

Amber Riley (singer/actress) and her partner Derek Hough
Glitzy. Goodman was not amused by the lack of content. Inaba, however loved it and so did Tonioli.
Scores: Inaba – 9, Goodman – 7, Tonioli – 10, Harland – 9

Brant Daugherty (actor) and his partner Peta Murgatroyd
A little jerky and angry for me. Goodman disagreed saying it was passionate. Tonioli thought he acted out his Contemporary well. Inaba said he was driven.
Scores: Inaba – 9, Goodman – 9, Tonioli – 9, Harland – 8

Bill Engvall (comedian) and his partner Emma Slater
Sweet. Goodman  thought it was a bit rushed. Tonioli said it was heartfelt and Inaba said he touched our souls in his Viennese Waltz.
Scores: Inaba – 8, Goodman – 8, Tonioli – 8, Harland – 8

Who went home: Christina Milian & Mark Ballas
Who’s going home next: Maybe Leah Remini, but after tonight’s shocker who knows!
Who Has Legs To Take Home The Mirror Ball: Amber, Corbin or possibly Elizabeth. Or even Brant! There is no front runner!