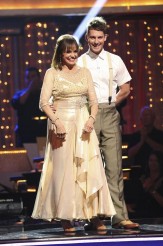 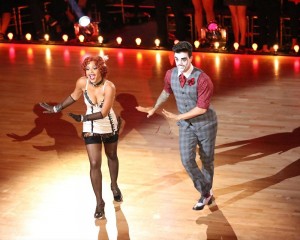 It’s a sad, sad day on DANCING WITH THE STARS, Valerie Harper and Tristan MacManus were eliminated on week four of the competition. Skill wise it was the right choice but heart wise, no way, not even close. She had us at hello and now it’s already time to say goodbye. No one has ever had the ability to take things in stride like Harper who managed to smile week after week even when receiving “5s” for scores. Let’s hope she continues to dance on her own. Score wise, Amber Riley & Derek Hough, Elizabeth Berkley & Val Chmerkovskiy, and Corbin Bleu & Karina Smirnoff all tied with 27 landing in first place.

Guest judge Julianne Hough showed great conformity in her scoring tonight. She, Carrie Ann Inaba, and Bruno Tonioli gave all the duos the exact same scores every time. If Tonioli gave someone an 8, so did Hough and Inaba. Although Hough did a fine job and it was amusing to see her score her brother Derek Hough and old pal Mark Ballas, some acrimony was missing. Yes, the old fart’s absence was felt. It was too nicey nice without good old Len Goodman. I never thought I would say that but it’s true. Missed more though, and STILL is the results show! I am going to say it every week until it comes back or I get sick of writing it.

Christina Milian (actress/singer)and her partner Mark Ballas
Smooth. Guest judge Julianne Hough told her she wanted to see her sweet side next week. Carrie Ann Inaba told her to work on her shoulders. Bruno Tonioli called her foxy in her Foxtrot.
Scores: Inaba – 8, Hough – 8, Tonioli – 8, Harland – 8

Jack Osbourne (reality TV star) and his partner Cheryl Burke
Much better this week. Inaba said, “Jack is back!” Hough said he had such a big improvement in his Quickstep. Tonioli called him jumping Jack flash.
Scores: Inaba –8, Hough –8, Tonioli – 8, Harland – 8

Amber Riley (singer/actress) and her partner Derek Hough
You could see how hard she worked! Inaba called her Tango clean. Tonioli said it was pure. Hough thought it was wonderful.
Scores: Inaba – 9, Hough – 9, Tonioli – 9, Harland – 9

Valerie Harper (actress) and her partner Tristan MacManus
So touching to watch her, no matter what. Inaba said she touched her heart. Hough called her Viennese Waltz beautiful. Tonioli said she had a nice poise.
Scores: Inaba – 6, Hough – 6, Tonioli – 6, Harland – 6

Brant Daugherty (actor) and his partner Peta Murgatroyd
He brought sex to the dance floor. Inaba said his lifts were fantastic in the Salsa. Hough thought it was a little loosey goosey. Tonioli told him to get more control.
Scores: Inaba – 7, Hough – 7, Tonioli – 7, Harland – 8

Who went home: So sad…Valerie Harper and Tristan MacManus
Who’s going home next: If we are going just by the scores, Bill Engvall might be next!
Who Has Legs To Take Home The Mirror Ball: Amber, Christina, Corbin or possibly Elizabeth. Or even Brant! There is no front runner!