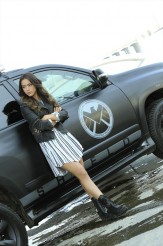 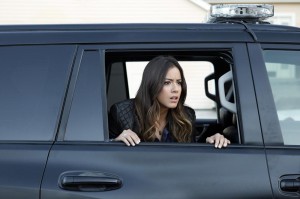 On MARVEL’S AGENTS OF SHIELD, ABC Tuesdays at 8 PM, the team members working under Agent Phil Coulson (Clark Gregg) are still getting used to each other. The newest recruit is brilliant, rebellious young computer hacker Skye, played by Chloe Bennet.

Bennet is herself somewhat new to film and television work. Previously, she had an arc on NASHVILLE last season and appeared in the telefilm INTERCEPT. Before that, the Chicago native had a singing career, including the pop single “Uh Oh,” released simultaneously in English and Mandarin editions.

At a party thrown by ABC for the Television Critics Association, Bennet provides some insights into her view of Skye and her overall career.

ASSIGNMENT X: When you went in to audition for AGENTS OF SHIELD, did you have any feelings about THE AVENGERS, Marvel, Joss Whedon …?

CHLOE BENNET: You know, I have six brothers, so Marvel Comics and comic books is what was going around in my house, not princesses and stuff like that, so yes, I did, but then once you’re cast in a Joss Whedon/Marvel show, you go to the comic book store and you watch all those movies and you become an even bigger fan.

AX: Was BUFFY something you watched when you were growing up?

BENNET: You know, I was a little too young to see BUFFY while it was on, but yeah, definitely. I lived in China for awhile and I watched BUFFY when I was there.

AX: What were you doing in China?

BENNET: I was a singer in China. I’m half-Chinese.

AX: Were you a singer before you were an actress?

BENNET: I professionally was, but in my heart, I don’t think I was. I did Second City in Chicago when I was thirteen and I had done theatre since I was about six.

AX: When did you get into doing on-camera work?

BENNET: Not until I moved to L.A., so about two years ago.

AX: How do you see Skye? She has very good people skills, even though she’s a loner. Do you see that as an interesting paradox?

BENNET: I think that was one of the main things that drew me to her. For someone who’s always alone, she’s great with people, which is a weird contrast. And she also happens to be a computer hacker, which is so intriguing and so different, so yeah.

What’s interesting about Skye is, she’s a computer hacker, but she’s not one of those girls with a dragon tattoo, who is awkward, socially inept. She’s actually better with people, I think, than with computers. So I think you are going to see a lot of her working with people, just as much as computers.

AX: Is Skye somebody who has deep convictions?

BENNET: I think everyone on the show does, and that definitely includes Skye.

AX: Is that something you like about the show overall?

BENNET: That’s something I love about the show. Everyone is so relatable, but there’s also so much depth to each character.

AX: Did you have to learn how to do anything to play Skye?

BENNET: I tried. There is only so much computer hacking training you can go through. I watched a couple TECH TALKs with computer hackers, and that’s pretty much the extent of it. I mean, I’ve read about it, but I kind of winged it – the whole acting thing [is pretending to do things one doesn’t really know how to do].

AX: Did you have to learn how to do any physical action? Presumably hanging around with S.H.I.E.L.D., Chloe may have to punch somebody or duck a punch.

BENNET: I think in the future, you may see some interesting stuff.

AX: Had you previously worked with a lot of green screen and things that aren’t there?

BENNET: No, I had never. That’s all new. We’re in such good hands. Brett [Dalton, who plays Agent Grant Ward] has had so much physical work and he’s just owned it and done such a great job.

AX: There has been a lot of secrecy surrounding AGENTS OF SHIELD – maybe as much around the show as in the show. How was it working without being able to talk to anybody on the outside about what you were doing?

BENNET: It’s a good thing we [on the show] all like each other a lot, because we pretty much can only talk to each other, because no one else can know anything.

AX: Given that fact, Is there anything else you’d like to say that you’re allowed to say?