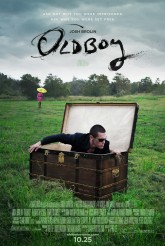 An elaborate plot that banks on more emotion than it generates

Sometimes, translation isn’t just a matter of words. Events and actions and motives that play one way in one culture look and feel very different when transposed to another country where sensibilities are different. This is likewise true of changing mediums – something that works gangbusters on the page may not translate to live-action and vice-versa.

Director Spike Lee’s American, English-action remake of Korean filmmaker Park Chan-wook’s 2003 OLDBOY, which in turn is based on a manga (Japanese comic series) by Garon Tsuchiya and Nobuaki Minegishi, has some merit, but it’s easy to see how the mixture of black comedy and high melodrama probably worked much better on the page, not to mention set in a much more conservative culture.

When we meet Joe (Josh Brolin), he’s an overconfident jerk of a New York advertising executive, being appalling to his ex-wife over the phone, blowing off their three-year-old daughter’s birthday and then torpedoing his career by making a sale, only to lose it by behaving like a sleazebag. Joe gets royally drunk in observation of his life going to hell – and then he gets kidnapped.

When Joe wakes up, he’s in a hotel room. He has TV, hotel-style clothing (bathrobe, shorts, etc.) and a shower, but he’s locked in. Meals – mostly Chinese takeout – are delivered through a slot at the bottom of the door. On the news, Joe sees that he is wanted for the murder of his ex-wife and that their daughter has been adopted.

After twenty years in captivity, Joe is drugged – and dropped off in the outside world. He understandably wants to know who took him, why they took him, and why they have now let him go.

The plot construction in Mark Protosevich’s screenplay is admirable, as the answers to all of the questions posed in the set-up are answered thoroughly and unexpectedly.

So what are the problems? For starters, Joe is not an Everyman – he’s so unpleasant at the outset that we’re not wondering why this poor fellow has been singled out, but rather who had the foresight to protect society from this generally toxic person. (This doesn’t turn out to be the motive, but we’d be perfectly prepared to believe it.)

Then there’s Joe’s hookup with Marie (Elizabeth Olsen), an attractive young woman who works at a free clinic. The scenes of both romance and joint sleuthing feel interchangeable with any number of others from thrillers where young women are inexplicably attracted to uncommonly rumpled and gruff older men. (It’s not that older men aren’t attractive to younger women, but in these circumstances, it’s hard to buy.) Even when we recognize that these sequences are necessary to get from Point A to Point B, they aren’t entertaining to watch on their own, which causes OLDBOY to lag.

Then there’s the explanation for what’s happening, which leaves us with a few more questions that can’t be elaborated on without spoiling the plot. The tone Lee sets never reaches a balance where the brutal yet cartoonish action sequences coexist comfortably with the operatic elements of the story – even with Brolin’s fearless performance, we’re very aware that we’re looking at something calculated and manufactured, rather than finding ourselves enveloped and moved.

OLDBOY is elaborate and complex, but that’s not the same thing as being engrossing and deep. It winds up being a better riddle than it is a movie.