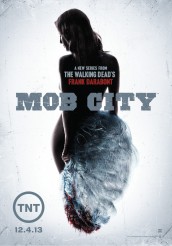 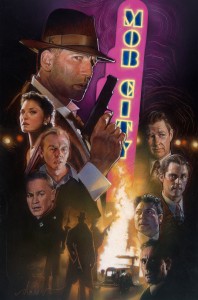 Writer/director/producer Frank Darabont, who brought the first season of THE WALKING DEAD to television (his feature credits include THE SHAWSHANK REDEMPTION, THE GREEN MILE and THE MIST), has been the primary force in getting MOB CITY on the screen.

At a poolside party thrown by Turner for the Television Critics Association at the Beverly Hilton Hotel, Darabont opens up on why he’s turned (in story terms) to crime.

ASSIGNMENT X: How is it that you ended up doing MOB CITY as TV noir instead of film noir?

FRANK DARABONT: [indicates TNT/TBS network president Michael Wright, who is standing nearby] He said yes [laughs]. Well, to be fair with the answer, I found the book L.A. NOIR, the John Buntin book, and I thought it would make a terrific television series, and then when I checked into the rights, I found out that my friend Michael DeLuca had them. So I called him up and said, “What are you doing with this?” He said, “I don’t know – you want to join forces on it?” I said, “Of course, let’s do it.” So that’s really where it comes from – finding the material, the source, at first. And to my eye, and to Mike’s as well, it felt like it had a better chance – it was a very big tapestry, so it had a better opportunity on TV than a feature.

AX: It allowed you to put more nuance in?

DARABONT: Yes, and to tell the story over a great span of time.

AX: How long is your first season?

AX: Several actors who you worked with on WALKING DEAD whose characters subsequently died on that show are in MOB CITY – Jon Bernthal, Jeffrey DeMunn …

DARABONT: Jon, yeah. Jeff has been in everything I’ve ever done, so I’m always looking for the Jeff DeMunn role.

AX: Who does he play in MOB CITY?

DARABONT: He plays the head of the detective squad, Hal Morrison. 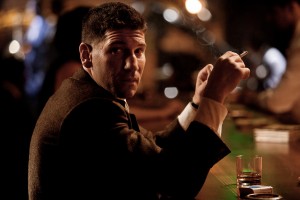 AX: You have certain actors – Laurie Holden is another one – you work with again and again. What is it about them that makes them your people?

DARABONT: Well, the working experience, for one thing, is a big factor. But it’s the quality of what they do – they elevate the material that they’re in. They’re not just fantastic pros, but I find they add a great texture to the story that is sort of irreplaceable. So if I see a role that’s perfect for a certain actor who I’ve worked with before, I go to them first. And then, barring that, I then have the pleasure of finding new actors to work with. Like this time around, I’m working with Robert Knepper for the first time. Oh, my God. I’ve been a fan of his for some years now, and now I’m an even bigger fan.

AX: Had you wanted to do another project set in this period since you made THE MAJESTIC – which is the early Fifties, but close?

DARABONT: Well, my heart is in the Forties, so I’m never too far away from it. I’ve always wanted to do a project set in that era. So I wouldn’t say that THE MAJESTIC had anything particular to do with it, but it’s another function of my love for that era.

AX: Would you say both projects are out of the same creative impulse to do something with the feel of that period?

DARABONT: Yeah. But this being very much a film noir kind of piece, that’s the genre I’ve always really, really loved, been devoted to it, always wanted to try my hand in that genre, so this is a great opportunity to do it.

AX: Is there something about the Forties that allows you to tell a story in a different way than in other eras?

DARABONT: You can cook ‘em a little hotter. The temperature can be a little bit turned up under them, because people who know the noir films of that era know that things are depicted in a slightly heightened fashion. The passions are just a little bit hotter and the edges are a little bit sharper. So it’s very fun from that standpoint.

AX: In terms of MOB CITY’s look, is it going to be a lot of shadows and what we think of as film noir?

DARABONT: As much as possible, yes. And I’ve had the pleasure of actually shooting on a couple of back lots, including Hennessy Street over at Universal, where God knows how many hundreds of noir films have been shot through the decades. That was a thrill – it was like a little stroll down film history lane. It was really cool.

AX: Can you talk about the feel of MOB CITY?

DARABONT: Up close, it’s all gutter. That idea is right out of Raymond Chandler. The underbelly of Los Angeles in that era is so attractive, very sexy in a way. I mean, post-war, when L.A. was a boom town and it was expanding, the Mob wanted to get in here and control it. Corruption in the police department was so rampant that more cops were on the Mob payrolls than not. What’s not to love about that? You know, it’s Hollywood. We’ve got all of Hollywood unfolding. Certain brains of the studios at that time, and how did that tie in with the Mob … I could go on and on.