Home » thanks for sharing soundtrack 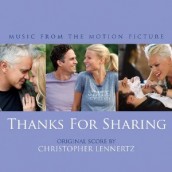 CD Review: THANKS FOR SHARING soundtrack

If there’s one addiction that it’s hard to think there’s ever too much of, then it’s likely sex addiction. So understandably, that clinically diagnosed affliction is often mocked by mainstream Hollywood, especially since it usually happens to befall incredibly good looking actors we don’t mind seeing have continuous sex. Given that cinematic problem (one that’s slightly remedied here with the casting of Josh Gad), one can only imagine the score that a comedy-centric composer like Christopher Lennertz might unleash on THANKS FOR SHARING. But as opposed to the rambunctious orchestrations of MARMADUKE or the dirty retro funk of IDENTITY THIEF, Lennertz ends up with a surprisingly understated, near-chamber score that stands as one of his creative best.

Avoiding the kind of moralistic, pretentious drudgery that accompanied the downbeat SHAME, Lennertz’s lovely piano theme and acoustical-keyboard sample ensemble takes it one twelve-step program at a time. While it’s very much in the “alt.” tradition of small indie scores, Lennertz also avoids much of those tinkly-guitary clichés as well. While strings convey the anguish of a sickness that most people don’t get, and more antic percussion the sexual monkey on an addict’s back, the bigger vibe here is one of rhythmic hope, a climb to the sun of committed relationships that’s done with plucky spirit, or the single, echoed note of a piano. While steps backwards are hit with “Stomp”-like bang a can percussion, the overall feeling of SHARING is one of classical lyricism, hearing real emotional bonding as the true intimacy its characters so desperately yearn for. THANKS can be giving to Lennertz for this lovely, little score that isn’t about going for easy laughs, but understated, and warmly understanding lyricism instead.

Clink on the link to Purchase the THANKS FOR SHARING soundtrack

Article Source: Assignment X
Article: CD Review of  the THANKS FOR SHARING soundtrack