Dean gets his Dr. Dolittle on in an intentionally goofy episode 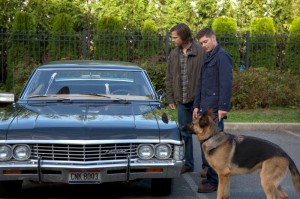 SUPERNATURAL tells us right up front that “Dog Dean Afternoon” is going to be one of its relatively light segments. The “Then” section, although it does have the bits necessary to keep us up to speed with the story arc, is mainly a montage of comedic bits that’s actually funnier than some of the episodes represented here.

Dean (Jensen Ackles) is still worried that Sam (Jared Padalecki) isn’t fully recovered from being dead in the last episode. However, since Sam still doesn’t know he died – because that would entail Dean telling him that Sam is possessed/being healed by the angel Ezekiel – Dean can’t put up much of an argument about taking on a case.

A small-town taxidermist has been crushed to death in his shop. The only witness is the man’s German Shepherd dog Colonel. While Dean and Sam are investigating this, there’s another death at the local animal shelter, where the culprit, Chef Leo (Steve Valentine), swallows a cat, then kills the shelter desk clerk when the man walks in on this.

Sam and Dean deduce that Colonel, now at the shelter, was present at both crime scenes. After ascertaining that the dog is just a dog (as opposed to a shape-shifter), they take the canine back to their hotel and get a spell over the phone from Kevin that allows Dean to talk to Colonel (voiced by Al Rodrigo). Actually, the spell – while it lasts – allows Dean to talk to all animals, resulting in an insult match with a pigeon. The spell also causes Dean to take on some canine mannerisms – he has a dog’s sense of smell, keeps scratching himself and shares Colonel’s appreciation for a female poodle. (Don’t ask, we’ll tell you anyway.)

Detection work and a belly rub for a Yorkie (voiced by Leslie Jordan) with a crush on Sam point the Winchesters to Leo’s restaurant. Before leaving the animal shelter, Dean frees all the dogs. The boys realize that Leo has been using magic so that he takes on the characteristics of whatever animal he eats. Leo scratches Sam across the neck, which ought to kill him, but Ezekiel-in-Sam is able to prevent death. Leo asks Sam what he is. Then Sam faints, Leo decides to eat him, gets the drop on Dean, ties him up, then eats a wolf heart to kill the somewhat doglike Dean. Dean gets free and whistles up the dogs he’s freed, who kill Leo.

Sam wants to know why Leo asked what he was. Dean goes into a riff about how Leo took something inside himself that totally took over – yes, that would be heavy portent about what’s going on with Ezekiel inside Sam – and therefore was making no sense. Dean finds a good home for Colonel. Colonel is in the midst of telling Dean the true purpose of dogs on Earth when the spell ends.

There are some actually funny things here, like the continued love for GAME OF THRONES – this makes two episodes in a row that mention it – and the name-checking of the schlock classic SHARKTOPUS. Dean mooning over the poodle, who is shot in supermodel slo-mo, is also up there with great moments in network series television.

However, the profusion of dead animal stuff is arguably repulsive. (The human gore and corpses on SUPERNATURAL are fake; the taxidermy animals are real.) Also, while this is a show that requires massive suspension of disbelief, it’s a lot easier to give credence to angels, demons, Leviathans and so on than to suppose that anybody can stuff more than one live adult cat in a burlap sack and get it anywhere before the sack is ripped to shreds.

Still, “Dog Dean Afternoon” deserves props for maintaining a pretty good balance between jokes and episode procedural and getting both of these to serve the seasonal arc. It’s not the series’ best episode, but it’s got some fine moments – it’s definitely not a dog.