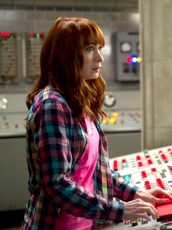 A fun and fanciful visit from the Land of Oz, complete with Wicked Witch 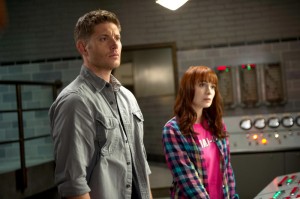 Instead of going for either terror or utterly bizarre (two of the more expected choices), this year’s SUPERNATURAL Halloween episode “Slumber Party” decides to open the door, literally, to Oz. In a black-and-white prologue set in 1935, Hunter Dorothy (Tiio West) brings in a captured witch (Maya Massar) to the Men of Letters headquarters. Something happens, though at first it’s not exactly clear what that is.

In the present, Sam (Jared Padalecki) comes up with the idea of using the Men of Letters headquarters’ computer to track down where the clusters of angels have landed. He thinks this is because this will help Castiel, but we, and Dean (Jensen Ackles), know this is really a suggestion from the angel Ezekiel, who is still residing inside Sam without Sam’s knowledge. Dean and Sam don’t really know how to work the computer – one of those massive room-sized relics – but they can call on someone who does: Charlie (Felicia Day). Charlie has been doing a bit of Hunting, but it’s not magical in the way she was hoping it would be.

Then a jar is knocked over and something weird happens to the wall in the computer room. Dean pulls out Dorothy, who it turns out bound her essence with the Witch to trap them both – they’ve been in stasis for 75 years. Dorothy warns that if she’s free, so is the Witch, and no one knows how to kill her. Turns out this isn’t just any Witch or any Dorothy – Dorothy was the daughter of THE WIZARD OF OZ author L. Frank Baum, who cleaned up his offspring’s adventures for public consumption and put them in his books. Baum was a Man of Letters and Dorothy resented him for writing the books, but Charlie points out that Baum had researched what happened to Dorothy and put clues in the stories.

The Witch wants a key that turns any door into a portal to Oz. She first zaps Charlie and kills her. Dean prevails on Ezekiel to heal Charlie, which the angel does reluctantly, saying that this will delay his healing and prolong his stay inside Sam.

Charlie and Sam don’t know what happened. However, Dorothy (in a conversation outside of Sam’s hearing) deduces that Charlie died and came back. Dorothy knows – it’s happened to her as well.

The Witch zaps Dean and Sam, turning them into creatures who do her bidding. Charlie and Sam get them down long enough to stab the Witch with the heels of the ruby high heels and kill her. Then Dorothy says she must return to Oz to help save the realm. This is exactly the kind of quest Charlie has always wanted to join, so both young women use the key to go to Oz. Sam starts to accept the Men of Letters headquarters as home (as in, “There’s no place like …”).

“Slumber Party” has a lot of nice, fun pop culture moments, like Dean, Sam and Charlie all sitting together watching Season 1 of GAME OF THRONES, with Sam announcing he’s also reading the books. The gradual realization that we’re dealing with the Dorothy and the Wicked Witch is also enjoyable, though fans of the OZ books will know that they were silver slippers, and even those who know OZ only from the movie will wonder about those lethal heels.

Having the Witch be speechless makes her a little more ominous, though her makeup looks a wee bit inconsistent.Crowley(Mark A. Sheppard) is also in the episode, but not given a lot to do. Perhaps this is a set-up for something to come later, and as always, he gives good snark, but his plot function here seems to be to first point the Witch in one direction and then send the boys after her. Right now, it smacks of filler, albeit the agreeable kind.

Still, it’s nice to have a break from angst now and then. Day’s sunny demeanor fits SUPERNATURAL’s overall ethos and the way Robbie Thompson’s teleplay gets the concept of Oz to synch up with the show’s mythology is pleasingly clever. This is a slumber party we would be happy to join.