The actor also talks his work on JUSTIFIED 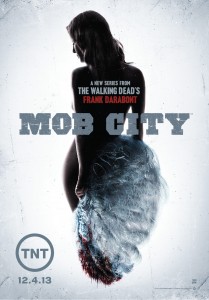 In MOB CITY, airing in three two-hour blocks on TNT on successive Wednesdays beginning tonightat 9 PM, some of the characters are fictional, like Jon Bernthal’s protagonist, LAPD Detective Joe Teague. However, some of the characters on both sides of the law in the Forties L.A./mobster noir drama, created by Frank Darabont based on John Buntin’s book, are taken from history. Ben “Bugsy” Siegel (Ed Burns) and Mickey Cohen (Jeremy Luke) made their mark in the annals of organized crime, while soon-to-be-LAPD Chief William Parker would someday have Parker Center named for him.

Neal McDonough portrays Parker as the man’s career is rising and his ambitions to take down the Mob are likewise growing. The actor, originally from Massachusetts, has played real people before, notably Lynn “Buck” Compton in the HBO WWII miniseries BAND OF BROTHERS. McDonough was also in director Clint Eastwood’s WWII feature film FLAGS OF OUR FATHERS. He’s also played Wyatt Cain, a sheriff in Oz, in the Syfy miniseries TIN MAN. In just the past few years, McDonough has been in the feature films CAPTAIN AMERICA, THE PHILLY KID and RED 2, the miniseries TO APPOMATOX and had a guest arc as the villainous and perverse Robert Quarles on JUSTIFIED.

McDonough talks about embodying Parker during a break during filming on MOB CITY’s elaborate sets, where TNT has arranged a visit for the Television Critics Association.

Asked about Parker’s integrity during a Q&A session held on a soundstage, McDonough says, “For me to play someone like Parker – Gene Roddenberry, who [had been an LAPD] officer, based Spock on William Parker, so he’s a real straight shooter. His only crack was that he had a bad drinking problem. Later on Mickey Cohen – obviously, the two of them were at odds about everything – [gave him] the nickname ‘Whiskey Bill.’ On that moment, Parker stopped drinking for the rest of his life. And he was then really pissed off at Mickey Cohen.

“The first few episodes of the season, we play him so straightforward, and then in [Episodes] Five and Six we see him start to crack a little bit. So for me as an actor playing the emotional side of a character is what I love to do. To play him really straightforward in the beginning and then to start to get slowly more and more emotional is great for me, and I love playing this guy.”

When the Q&A is over, McDonough is amenable to a follow-up discussion.

ASSIGNMENT X: Is William Parker the first person you’ve played in awhile who is generally on the right side of what’s happening around him?

AX: Well, in RED 2, your character’s heart is sort of in the right place …

McDONOUGH: That’s right, exactly. But this has been, no question, the first time I’ve had a chance to play an Eliot Ness, Western character since TIN MAN. Wyatt Cain in TIN MAN and Buck Compton in BAND OF BROTHERS are my two favorite characters that I’ve ever played. And now, to get to play Parker – there aren’t many books out there. There aren’t any biographies about him; it’s more hearsay. The funny thing is, Buck Compton – he just passed this year – was great, great pals with Parker. They were at Normandy together and they were on the police force together and then when Compton became a lawyer, then was with the District Attorney’s office, they were great, great pals. So to hear about Parker, and hear how focused he was and how driven he was to clean up the streets that he loved so much, was pretty fantastic. Starting from nothing, coming from South Dakota, and coming to the big city of Los Angeles and really falling in love with it and making it his own, he was a pretty amazing guy. Again, there are no biographies about him, so I have a little latitude to make him my own. I love playing flawed characters, so to find the flaws in this Eliot Ness type of character for me, that’s fantastic.

AX: Are there any similarities between William Parker and Buck Compton?

McDONOUGH: Oh, yeah. The guys back then – there was no b.s. about them, it was just straightforward stuff. Buck was chief prosecuting attorney for Sirhan Sirhan and the Manson trial and so many other things, and what a great American he was. And Parker is the same. Parker wanted to make sure that where he lived was the best place that it could be, and he took it very, very seriously. He took it so seriously that he got such a massive drinking problem, because the pressure just ate at him and ate at him, and learning from Buck what it was like, the pain and anguish that he went through. Plus he went to Normandy at a much later age than everyone else, and then to become the chief ten years after that, that’s a pretty impressive jump.

AX: What does wearing the police uniform do for you?

McDONOUGH: You know, it’s funny. People talk about speech patterns and how you sound back in that time. He was from Dakota, so he wasn’t as rapid-fire speech as the rest of them. So I tried to figure out what my speech pattern was going to be. As soon as I put on the uniform, it just happened, and I knew exactly – it’s amazing. The uniform really makes a difference.

AX: Would you say Robert Quarles, your Detroit gangster character on JUSTIFIED, is the most extreme character you’ve played?

McDONOUGH: Oh, my gosh, yes. Of all the despicable characters that I have played, he was without question the most fun, because his tongue was firmly planted into his cheek. So it was – and I could go as large as I wanted to. The only thing I said to Graham [Yost, JUSTIFIED’s executive producer/creator] is, “I would love to by Episode Ten be naked and hopped up on my own stuff. It would be kind of fun to do.” Then by Episode Eight, there I was, naked and doing my lines of Oxycontin.

AX: Is there anything you’d like to say about MOB CITY right now?

McDONOUGH: Frank Darabont is a kid in a candy store. He directs all these episodes with these incredibly long hours, seventeen-, eighteen-hour days, day after day after day, happy as a pig in poo. He wants to make sure the show is great because he loves it so much and he loves us so much. And now, because of that, we love him so much.