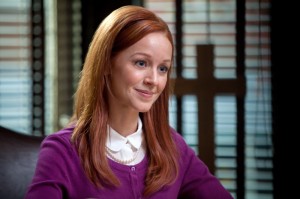 Virginity figures mightily into the mythology of many cultures. SUPERNATURAL visited this well once before in the Season 6 dragon episode “Like a Virgin,” but “Rock and a Hard Place” wrings some changes on the concept. This time, it’s not virgins but pretend-virgins who are the victims, and the culprit is not a dragon but rather an aggrieved Roman goddess.

When old friend Sheriff Jody Mills (Kim Rhodes) calls from South Dakota about four strange disappearances, Sam (Jared Padalecki) and Dean show up to help out. It turns out that all of the missing people belonged to a local church group that not only promotes sexual abstinence, but actually claims to restore virginity in the eyes of the Lord to those who sign an abstinence pledge and join the group. Since the only way to sit in on the group is to become a member, and since the best way to investigate is to talk to the group members, Dean and Sam join.

Dean thinks he recognizes the group’s counselor Susie (Susie Abremeit), though she doesn’t recognize him. Dean gives the chastity group a very descriptive account (again, in TV-14 terms) of what he’s giving up, which has the women clutching their skirts in great longing. Susie offers Dean some private counseling about abstinence. Dean finds a porn DVD starring Susie under another name – which is one of Dean’s favorite skin flicks. He’s one of her biggest fans. Susie at first says she wanted to put that part of her life behind her, but when Dean says he would have joined a mariachi band just to be near her, we first wish SUPERNATURAL was just that much more crazy and gave us the visual, and then one thing leads to another.

Meanwhile, Sam interviews an irate group member and finds that all of the people who’ve disappeared broke their chastity vows. Knowing that Dean has gone off with Susie, Sam keeps trying to phone him, but of course Dean is busy.

Sam and Jody find out that the likely culprit in the abductions is Vesta, the Roman goddess who was responsible for crop production and who was served by vestal virgins, who had to stick with her for thirty years.

Vesta (Lindy Booth) has been masquerading as the perky young woman who signs people up for the virginity group. When they break their vows, she drags them underground to starve. She now only eats their livers, because it’s the one part of the body that reliably purifies the rest.

Sam and Jody figure out where Vesta is likely storing her victims. The way to destroy Vesta is with an oak weapon dipped in virgin blood. Jody winds up punching in the nose a clearly virginal member of the chastity group when she won’t cooperate otherwise, getting the bit of blood that is needed.

Vesta stabs Jody, temporarily knocks out Sam, then goes for his liver when he comes round. However, Vesta recoils, saying Sam is held together inside by “safety pins” – she’s not sure how he’s alive. Jody rallies and stabs Vesta, who disintegrates.

When Sam and Dean are alone together, Sam wonders what Vesta meant. Seeing that Sam is blaming himself for not getting better, Dean is on the verge of telling Sam the truth when Ezekiel – the angel inhabiting Sam and keeping him alive – comes to the fore and tells Dean now isn’t the time for that kind of revelation. Sam will be healed soon. Dean accepts this, albeit reluctantly, and tells Sam it’s not his fault.

First of all, it’s nice to see Jody up and about after the thrashing she got last time we saw her. Second, cheers to actress Booth, who does both the scarily peppy and irate goddess versions of her character wonderfully well.

Ackles does the faux adult film banter with such evident relish that even if one’s response is eye-rolling rather than mirth (for most, it will probably be both) that it’s fun just to see him throw himself into it. This also diminishes the “ick” factor in what is actually a man confronting a woman with a past she’s trying to hide and expecting sex because of it. Note to viewers – he’s Dean Winchester and you’re not, so don’t try this at home or anywhere else.

There are real “purity pledge” groups with agendas that go far beyond sexual abstinence. SUPERNATURAL gives the whole notion a relatively light tweak. As the show seldom delves into actual politics, although theoretically there’s more room for humor and commentary in the topic, one can’t fault “Rock and a Hard Place” for not doing something not in the overall mandate.

The supernatural mythology is new-ish, though the show has done variations on this a time or three before. As for Sam thinking there’s something wrong, well, this has come up in the past as well. So we’ve got Sam feeling guilty about perceiving himself as defective, and Dean feeling guilty about letting Sam feel guilty, as well as about not telling Sam he’s carrying an angel around. Odds seem good that revelation on this score is right around the corner.

Meanwhile, “Rock and a Hard Place” is a decent episode, neither standout nor clunker.