An okay episode with a dubious message 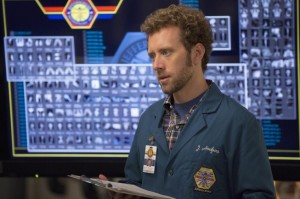 BONES moves to Friday nights with “The Fury in the Jury,” which sees Brennan (Emily Deschanel) doing her civic duty while managing to drive her fellow jurors – not to mention the judge and the defense attorney – crazy. This is moderately entertaining in the BONES mode, but it winds up, perhaps inadvertently, suggesting that innocent until proven guilty isn’t a good system and to take Booth (David Boreanaz) at his word when he says if someone is arrested, they’re usually guilty. To use legal terminology to describe this assertion, yeesh.

Brennan finds herself on a sequestered jury deciding the case of soccer star Peter Kidman (Ben Lawson), accused of murdering his wife. Originally the lone holdout for a not-guilty verdict, Brennan finally convinces her fellow jurors there isn’t enough evidence to find the defendant guilty beyond reasonable doubt. While this is happening, the lab receives a dead body that turns out to be Kidman’s houseguest, a man who had reportedly decided to testify for the prosecution rather than the defense. Because of confidentiality, Booth and the lab team can’t tell Brennan what they’ve discovered, any more than Brennan can discuss the courtroom case with them.

When Kidman is found not guilty and Brennan is freed back into the world, she is horrified that she convinced her peers to release a probably guilty man. She, Booth and the team work to find evidence that Kidman killed his houseguest – which he did by leaving the house dressed as his bodyguard, then finishing off the victim when Kidman’s sister tried and failed to do the deed.

In other news, Angela (Michaela Conlin) finally identifies the woman who stole Cam’s (Tamara Taylor) i.d. The thief turns out to be Cam’s old college roommate. Cam is stunned.

The i.d. theft storyline will clearly stretch into more episodes and it’s intriguing – at this point, nearly everyone is afraid of this happening (probably much more than of being murdered), and the incident here has a personal angle, so we’re curious to see what comes next.

The forensic science involved in figuring out where the victim was killed, how he died and who was responsible are all nicely detailed, although having lab assistant Daisy (Carla Gallo) return to being neurotically insecure is less fun to watch than it may have been to write.

As for Brennan being on a jury, “Fury” has to juggle what we expect from the outspoken character and what we know she would have to be aware of from her many experiences testifying in court. Is it funny to have her reply directly to the defense attorney? Sure. Is it credible? Not really. It’s much easier to believe it when Brennan lectures her fellow jurors on why the prosecution’s case doesn’t work. Of course, since Brennan is so outraged over being fooled that she doesn’t even hang onto the fact that she was doing exactly what a juror is supposed to do – strictly look at the evidence provided – this gets washed away a bit.

“The Fury in the Jury” is diverting, but not up there with the best of BONES.