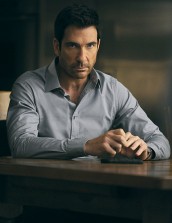 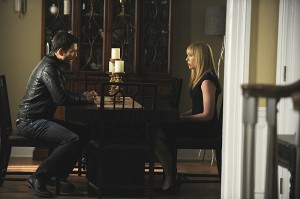 In CBS’s new series HOSTAGES, Mondays at 10 PM, Toni Collette plays noted surgeon Dr. Ellen Sanders, who is chosen to operate on the President of theUnited States (James Naughton). This is great news for Ellen, until she, her husband (Tate Donovan) and their adolescent son Jake (Mateus Sanders) and daughter Morgan (Quinn Taylor) are held captive in their own home by a small group led by renegade FBI agent Duncan Carlisle (Dylan McDermott).Duncan demands that Ellen let the president die during surgery – or her family will be killed. In the pilot episode, Ellen lets the president live, setting the stage for a whole series of manipulations and negotiations.

ASSIGNMENT X: How did HOSTAGES come about as a project?

JEFFREY NACHMANOFF: It was a pitch for an Israeli television show. Alon Aranya is one of our producers – he acquired the rights and brought it to JBTV [Jerry Bruckheimer’s television production company].

AX: There seems to be a small surge of American television material based on Israeli television lately – IN TREATMENT, HOMELAND, now HOSTAGES. Do you have any idea why that is?

NACHMANOFF: I have absolutely no idea, except to say that I think that in our market sometimes, we get so focused on chasing last year’s successes that we get a little bit tripped up, instead of thinking broad, whereas in their market, I don’t think they have those same kinds of financial pressures, because the stakes are different, and they’re able to think a little more freely.

RICK EID: I think a lot of times – I may be totally making this up, but in terms of the foreign markets, with smaller TV infrastructure, it’s more of an auteur business and they say, “Hey, here’s some money, go do your thing.” And sometimes in that environment, some really original material is developed. 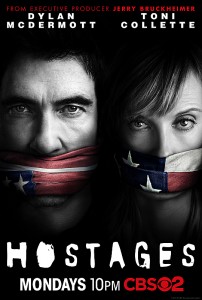 AX: Do you see any similarities between HOSTAGE and 24?

EID: Well, certainly 24 is the granddaddy of network serialized programming. I think there are some similarities. Look, I was a fan of the show. It’s quite different also. That’s a pure procedural in which the main character is an agent of the government, trying to fulfill a mission. In ours, the main characters are an ordinary American family. But in the pitch, I’m not shy about it. When we were first pitching a show, I described it as, “24 meets DOWNTON ABBEY.” [laughs] Elements of family and elements of action and suspense.

NACHMANOFF: Hopefully, the suspense and tension will feel a little bit like 24. I mean, that’s a successful show that had a great run.

AX: I was just thinking in terms of each episode of HOSTAGES being roughly one day, versus it being an hour on 24 …

NACHMANOFF: The time isn’t really part of the concept like it was in 24. That was ingrained in the DNA of the show. This is just how our show sort of unfolded. It made sense for each day to be an episode.

AX: Is there anything you were looking at for inspiration in terms of style and/or structure?

AX: How does your writing partnership work?

EID: We collaborate on ideas. Literally, we split up the script, and then we write, and we rewrite each other, we rewrite ourselves, it’s very collaborative.

NACHMANOFF: I jokingly said at one point to my wife, “It’s awesome. It’s like I hit the clone button. Now there’s two of me.” Because as soon as Rick came on board, we started working on the series document. Now we’ve written two scripts together and I can’t tell or even remember which scenes he wrote and which scenes I wrote. They’re all blended together.

EID: Not really. I mean, if you’ve broken the right story and the episode’s working, it should all feel right, so, so far, so good.

AX: In the CBS upfront presentation, footage was shown of Ellen and Duncan kissing. What should we derive from that?

EID: We are committed to the idea that the relationship is going to be interesting and unpredictable between the hostage and the hostage-taker.

AX: The daughter character, Morgan, is pregnant. How much is that going to factor into the storyline?

EID: She’s in the earliest stages of pregnancy you can imagine. It’s a part of her storyline, but we don’t want her being “the girl that’s pregnant” to define her character. She’s not just a girl that’s pregnant, she’s a real person and it’s an issue, and it’s something she’s dealing with, and we’re going to treat it seriously and delicately.

AX: What do you think Dylan McDermott and Toni Collette bring to HOSTAGES?

EID: Lots and lots of talent. They’re both great actors, so we’re lucky.

AX: Silly, tweaky question – James Naughton, who plays your U.S. president, has one of the most recognizable voices on TV, as he does a lot of commercials, especially for Ci*a*lis. In writing his dialogue, do you have to be careful that you don’t have any words that begin with the sound “See”?

NACHMANOFF: Now that we know that, we’ll keep an eye on it, but you need an iconic actor to be the president, and everyone’s used Morgan Freeman a million times, I don’t think he’s available, so Jim just felt like he’s a realistic guy to be a president.

EID: We hope people recognize him so much on this show that it in fact becomes an iconic voice for C*i*alis, they get their bang for their buck.

EID: Not right now. This is enough. This is good.

NACHMANOFF: There are things in development – the answer is no. Honestly, this is going to take up all my time between now and Christmas. That’s absolutely true.