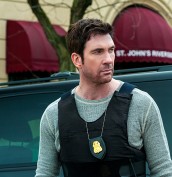 A thriller off to a promising start 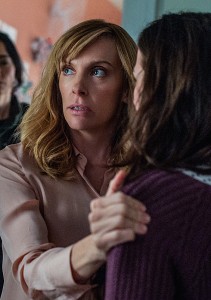 It’s not right to compare every serialized TV thriller series to 24, but HOSTAGES makes such an analogy tempting, particularly to the previous series’ first season. There is the central story element, with a doctor being blackmailed by a rogue FBI agent, there’s the pacing, there are the twists. There are also conflicted people with guns and a family full of secrets. Most of all, there’s that sense of, “Okay, I’ll bite, what happens next?”

When we meet FBI Agent Duncan Carlisle (Dylan McDermott), he’s in the midst of – successfully, as it turns out – negotiating a hostage crisis. When we meet famed thoracic surgeon Dr. Ellen Sanders, she’s happily stressing over the fact that she’s been selected to operate on U.S. President Paul Kincaid (James Naughton). We meet Ellen’s family – husband Brian (Tate Donovan) seems to be having money and work problems, son Jake (Mateus Ward) is in really hot water at school and daughter Morgan (Quinn Shephard) has major issues of her own. It’s not threatening to be a quiet evening at home – and that’s beforeCarlisle and his people enter, occupy the place and demand that Ellen cause the President to die during surgery. If nothing else, Jack Bauer would be called in to sort this out – only he’s not part of this show, so we have extra reason to be intrigued to see what everyone will do.

These are clearly high stakes, and there’s also a good mystery as to why Carlisleis doing this at all – he doesn’t seem to be a stereotypical bad guy or a ranting ideologue. The smaller but still dramatic human dramas going on with the rest of the characters keep things lively while the A story gets a breather from time to time, showing us that the people making HOSTAGES know what they’re doing.

There is a question, of course, as to how the storyline can sustain itself over fifteen episodes, but since the opener is so sturdily constructed, we’re inclined to trust the writers.

It’s a pleasure to see Collette getting to play sane, skilled and tough – she makes us invested in what Ellen will do next in every arena. McDermott effectively shows us thatCarlisleis both tormented and determined, and Donovan has charm and humanity in what could have been a less dimensional role. Ward and Shephard are both persuasive.

It’s hard to tell from the pilot precisely where HOSTAGES will go or how much stretching of disbelief will be required, but for now, it’s off to a promising start.

TV Review: TWO AND A HALF MEN - Season 9 premiere - “Nice to Meet You,...
TV Review: DALLAS - Season 1 - “No Good Deed”
CRIMINAL MINDS: Actor Shemar Moore on Season 11 and more - Exclusive I...
SUPERNATURAL: Actor Misha Collins gives the scoop on the end of the se...