Home » bones review the spark in the park 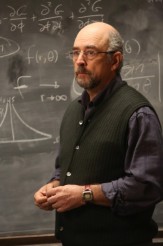 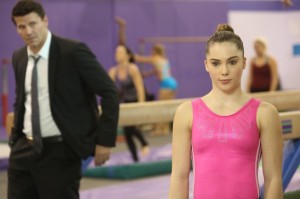 On BONES, many episodes are devoted to the brilliant but socially baffled Brennan (Emily Deschanel) learning how other people see the world. Few episodes are given over to people who share Brennan’s way of seeing things. “The Spark in the Park” gives us a physicist, Dr. Watters (Richard Schiff), who expresses himself in equations the way Brennan reveals herself through her own work. Their interactions reveal something rare and lovely.

The episode gets its title from what happens when a well-meaning couple in a park find a dead body during a rainstorm, attempt to shield the corpse with an umbrella and invite a lightning strike. The charred remains are taken to the Jeffersonian, where the team deduces the victim is a teenaged girl, Amanda Watters.

Various injuries to the body cause everyone to first believe that Amanda was the victim of physical abuse. Then it’s learned she was a competitive gymnast, which is the explanation for her injuries. Booth (David Boreanaz) suspects Dr. Watters, as the bereaved father doesn’t fit the FBI agent’s notion of a grieving parent. The culprit, however, turns out to be Amanda’s same-age friend Rachel, a promising cellist. Both young women felt a great deal of parental pressure and had agreed to run away together, but Amanda thought better of it and Rachel felt betrayed.

Brennan feels the desire to apologize to Dr. Watters for having questioned him while he was grieving. When he sees her sympathy is genuine, Watters lets Brennan see the huge equation he’s working on – it describes Amanda’s life numerically. Brennan thinks it’s the most beautiful thing she’s ever seen.

At the same time, Cam (Tamara Taylor) gets to confront the ex-friend who stole her identity and has wrecked Cam’s credit. At first, Cam wants to press for a harsher prison sentence, against the advice of boyfriend Aristoo (Pej Vahdat). However, when Cam sits down with the other woman, the toxic resentment and bizarre rationalizations of the culprit are overwhelming. Cam realizes the healthiest thing to do is move on and stop dwelling on it, because further interaction with the ex-friend, even in court, will only make things worse. Cam realizes what Aristoo has been trying to tell her and they make up.

“The Spark in the Park” is a really strong episode, as it covers a huge amount of ground with grace. We see Brennan respecting and feeling empathy with another person who exists on her wavelength, and we also see Booth acting just a bit jealous that Brennan connects with Watters in a way she doesn’t connect with her husband. (Actually, Booth owes Watters an apology much more than Brennan does, but that’s a separate issue.) Schiff as the tamped-down scientist who is almost paralyzed by loss is just about perfect

Then there’s Cam and Aristoo. Their soft-voiced fight about how Cam should address her nemesis is economical yet cutting. When Aristoo attempts to explain to Cam how he has let go of his anger at what happened to him in Iran, she responds with, “Well, now we know who the good person is in this relationship.” We feel actual dismay that the relationship may disintegrate under the weight of Cam’s rage and Aristoo’s hurt.

The scene between Cam and the identity thief is likewise sharp. Cam realizes that, far from getting the other woman to feel shame, she needs to get out before being overwhelmed by snarling self-justification. Granted, Cam’s decision to walk away is far less about forgiveness than about self-preservation, but it still works. The reunion scene between Cam and Aristoo is satisfying.

“The Spark in the Park” is expertly made and genuinely moving. Well done, BONES team.