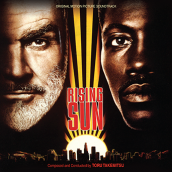 Where most Hollywood “Asian” movies usually kowtowed Orientals into secondary positions below the American actors (though mixed up a bit in this case with the brogue of Sean Connery and the urban cool of Wesley Snipes), we can credit RISING SUN director Philip Kaufman for bringing some level of authenticity to this thriller’s cultural melange by hiring Toru Takemitsu for his sole Hollywood film. One of Japan’s most revered movie composers for his work on KWAIDAN, WOMAN IN THE DUNES and RAN, Takemitsu’s sole work truly stands out for his mastery of the distinctly American genre form known as film noir. A sexy, smoky sax gives erotic heat to the film’s murder mystery, with the kind of brass feeling that could be right out of an old school Warner Brothers picture. But it’s just the jumping off point for RISING SUN to venture into beautiful, impressionistic weirdness with the horror movie sound of a Theremin-like Ondes Martenot, eerie reverberated percussion, tingling strings.

Yet there’s a Japanese sensibility at play in Takemitu’s use of his country’s Koto, flutes and ethnic drumming. The tantalizing results are very much the sound of an alien in LA, conveying his country’s age-old identity with a distinctively strange grasp of a murder mystery score, two musical identities that make for a soundtrack of startling mystery and erotic beauty. While most people never appreciated Takemitsu’s achievement in its original, greatly truncated album, Kritzerland’s new, complete release of his score (complete with jazz Karaoke and furious drumming by Tsunami) is a chance to discover one of the 90s most intriguing scores.

Clink on the link to Purchase the RISING SUN soundtrack