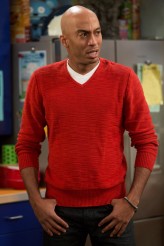 The actors talk about their characters and the live audience 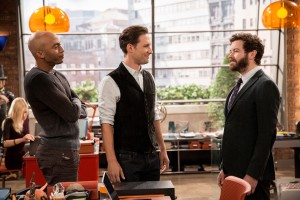 On TBS’ MEN AT WORK, now in its third season Wednesdays at 10 PM, James Lesure plays Gibbs and Michael Cassidy portrays Tyler Mitchell. Along with Danny Masterson and Adam Busch, Lesure and Cassidy make up the quartet of friends in the half-hour comedy created by Breckin Meyer, based on his own life experiences.

L.A. native Lesure is a film and television veteran, with credits ranging from a small role in CRIMSON TIDE to series regular stints on FOR YOUR LOVE, LAS VEGAS and MR. SUNSHINE. Cassidy, originally from Oregon, likewise has a substantial resume, including stints on THE O.C., HIDDEN PALMS, SMALLVILLE and PRIVILEGED and work in films including ZOOM and ARGO.

As MEN AT WORK’s main characters are colleagues at a magazine, there’s a large set for the publication’s lounge area on the soundstage in front of the empty seats where the audience will be on tape night. Lesure and Cassidy are both here during a visit arranged by TBS for the Television Critics Association, happy to talk about their roles.

AX: How would you describe your character’s role within this group?

JAMES LESURE: Gibbs is the glue that keeps these guys together. He’s kind of a catalyst for action, I think. Anything – any sort of adventure, Gibbs is willing to participate in, so that’s how I’d describe him in a nutshell.

MICHAEL CASSIDY: I play Tyler and Tyler’s like the pretty guy in the group, so they make fun of me for looking like a woman sometimes and I usually get into trouble with women, being misunderstood and stuff like that. But I’m also probably, of the four guys, the one who’s the most professional. I do my job and I don’t mess around at work and stuff like that. I don’t know – he’s kind of a weirdo.

CASSIDY: You know, that’s a great question. I have not met the real Tyler Mitchell. Breckin came up to me a couple months ago and said, “Hey, it’s Tyler Mitchell’s birthday.” I said, “Let me call him,” and he said, “No, I don’t want you guys to meet” [laughs], so I don’t know if that’s ever going to happen.

AX: Is he afraid if the real Tyler and the fictional Tyler got together, it would be like matter and antimatter and the universe might explode?

CASSIDY: Exactly, yeah. It might blow his mind in some way.

AX: Is Gibbs very excited about working at the magazine, or is it just about paying the bills?

LESURE: Well, my character’s a photographer, and he is confident in what he does, and I think he’s good at what he does, and right now, he’s just sort of in the moment and good with being right here at the Full Steam magazine.

AX: There are a lot of pictures of women in swimwear. Are these Gibbs’ primary photographic subjects?

LESURE: Right. It just happens to be a lady in a bikini. But he takes pictures of fruit in a bowl or something like that, whatever the subject may be.

AX: Did you learn how to do anything with cameras for the photography aspect of the job?

LESURE: No. I know now to take the cover off before I start shooting and that’s about it [laughs]. There’s so much more I could learn about a camera.

AX: But I’m guessing he’s more excited about the lady in the bikini.

LESURE: Well, it depends on the fruit [laughs].

AX: Breckin Meyer was saying that you as actors sometimes ad-lib …

CASSIDY: We do that during the week. We’ll rehearse and then in the afternoon, [the producers will] come watch a run-through, and then after the run-through, I’ll say, “Hey, can I try this,” or “Can you give me something else here” and they’re very open to that. But once the audience is here, the show is pretty much set in stone and we just sort of tell the story in front of the audience. 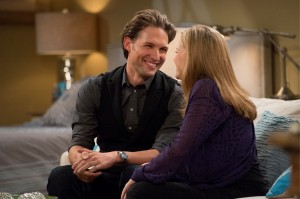 LESURE: This place is good for collaboration, so every now and then, we’ll sort of ad-lib a line or two there, and sometimes they’re pretty open to it, which is great. For the most part, though, I just think the writing’s so good on the show, I’m just good with saying the words as is and I enjoy it.

AX: And when do you feel like you want to ad-lib? Do you always think, “I’d like to tweak this a little,” or are there just particular situations where you go, “Oh, I think I can make that a little bit more …”

LESURE: Well, if we’ve done a scene once or twice in front of the audience, and they may have gotten familiar with it, try to mix it up and keep it fresh, so I’m more inclined to do some improv then.

AX: Do you like doing multi-camera comedy with a live audience, or do you have a preference for single camera, or does it matter?

LESURE: You know what? Because it had been a while since I had done multi-camera, it took me a minute to get adjusted again, so at that time, I remember thinking, “Oh, I like the single camera more,” because it felt a little more relaxed, and there was more room for improv and stuff like that in my experience. Now, though, that we’ve been on our third season, I’ve found a comfort level here, so I’m definitely liking this more now again and it’s hard for me to pick which one I like best, because that immediate response is something sweet.

CASSIDY: I love it, because it reminds me of theatre, which I have probably the most experience with of anything, so it’s very comfortable for me – I really like it.

AX: What are your favorite episodes or scenes that we’ve seen so far?

CASSIDY: I actually like this [third-]season premiere. It was probably a top one for me, because they gave me a lot of funny stuff to do. I play a guy who thought he was getting old and how he was dealing with that was really funny, and I’m trying to think of what else I like. That’s probably my favorite one.

AX: What would you most like people to know about MEN AT WORK right now?

CASSIDY: I was just talking to [another reporter, who] was saying she’s a woman, so she didn’t expect to like the show as much as she does, and I think that’s definitely a message that we could do better getting out there, is that women like the show when they watch it as well as men.

LESURE: I just want to end the interview with peace and love. That’s it.