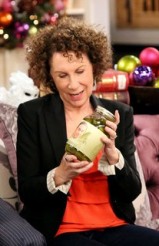 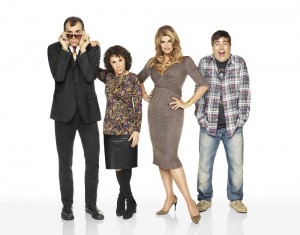 On KIRSTIE, real New Yorker Perlman plays TV show New Yorker Thelma Katz. The actress also had recurring roles on TAXI and HUNG, headlined the series PEARL and appeared in a number of feature films, including MATILDA, THE SESSIONS and CANADIAN BACON. She also did a guest turn on TV Land’s hit HOT IN CLEVELAND.

Perlman is one of the guests at a lunch that TV Land is hosting for the Television Critics Association. It’s loud in the room, because virtually all the stars of all of TV Land’s shows are present, and all of them are giving simultaneous interviews to clusters of reporters. The petite Perlman remains seated, often laughing as she discusses her work on KIRSTIE and her previous turn on CHEERS.

AX: Were you looking to do a half-hour series when KIRSTIE came along?

RHEA PERLMAN: I was always delighted to be offered a half-hour, but I was especially delighted to be working with Kirstie. We had done another project [THE MANZANIS] the year before, with the same creator, Marco Pennette, for a different network, and that didn’t get picked up. But Kirstie immediately told Marco, “Well, I know TV Land’s interested in working with me. I want to do this kind of show. Let’s see if we can make something, create it.” And that’s how it came about. I was hoping I was going to be in it. It’s one of those things – we like each other, we like working together. Her energy is great.

AX: Do you have memories of your first season of CHEERS?

PERLMAN: I had enormous faith in the writing and the directing and before I even said one word, I assumed the show was going to be a huge hit, like TAXI. And the weird thing is, we were all so naïve on the show, which was a great thing, because we were never bothered in those days about how it was doing or the numbers. And what I found out much later is, our numbers were absolutely awful and we were in the bottom two for a year-and-a-half. We had a great network and [executives] Brandon Tartikoff and Grant Tinker. They held on and they made us feel like we were fabulous. They loved us, they loved what we were doing. It was a magic project.

AX: How is it working with TV Land?

PERLMAN: They’re very nurturing. They wanted our show to succeed, and we felt that right away. There are some networks where I’ve worked on shows where [the executives from the] network come around, and you’re doing a show, but they’re like, “Yeah, okay, this isn’t what we were thinking.” But this network is very much more like, they like it, they want it to go. They’re doing everything they can. And they certainly put a lot of publicity into it. Did you see that [advertisement on the] wall on Sunset Boulevard with me in it? [laughs] We were all so large that I couldn’t believe it. It was like, “What?”

AX: Are there any jokes on KIRSTIE that make any sort of reference to your and Kirstie Alley’s shared history on CHEERS?

PERLMAN: I don’t think so. [The KIRSTIE characters] are very dear friends. CHEERS – I didn’t hate her [character] like I hated Diane, but you know, I put up with her [laughs]. She was the boss of the place, so I put up with her. But in this show, I really like her, even though I have to put up with some of her crap, and I don’t work with her, I work for her, but I really like her. We’re best friends, kind of Lucy/Ethel. It’s fun. We get to do some creative stuff. One episode already aired where I got to fly [laughs]. Anyone asks me to fly, I’m in.

AX: Were you on wires?

PERLMAN: Yes. Of course, there was a stunt person as well, doing part of the stunt, but it was really fun. We talked about that – “Why weren’t we doing this when we were twenty-five, thirty, or in our twenties?” But the great thing is, we can still do it. It makes you feel young. It’s fun to do this work. I’m not a bungee jumper or anything like that. I’m not a daredevil in real life. But doing this stuff, it feels safe.

AX: You played Mary Steenburgen’s cat on an episode of WILFRED. How did you like doing that guest spot?

PERLMAN: [laughs] Meow! I love it. I loved playing a cat.

AX: What else have you been up doing?

PERLMAN: I just did an episode of THE NEIGHBORS. I played Jami Gertz’s mom. Other than that, since we finished shooting, I’ve been doing p.r. for this, and then we had Christmas and no other work stuff.

AX: What about your charity work?

PERLMAN: I’m always involved in charity stuff, especially with children in foster care who are eligible for adoption. I work in many, many children’s organizations, but the Children’s Action Network is one that I’ve worked with a long, long time, for maybe thirty years. When I first started working with them, they did an immunization campaign, they did food banks and stuff like that, but their focus for the last ten or so years has been on [facilitating adoptions for] children from foster care in L.A. and Riverside County, and there are a lot of them. A lot of people don’t know about them – they’re a very underserved and under-looked-at population of kids. So we’ve been doing these videos of them where they just talk about themselves, the ones whose parents’ rights have been terminated, so they’re never going to go back to their parents, so they can be adopted. And we air them on the Children’s Action Network website – childrensactionnetwork.org – and also, GOOD DAY L.A. airs them for us and it’s been good. It’s hard to know, because it’s all very private, why a child gets adopted, finds a permanent home. Lots of them do, but we don’t know if it’s directly because of what we’re doing. But it’s certainly bringing awareness to [the situation].