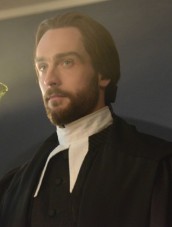 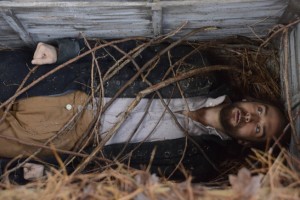 The first season of SLEEPY HOLLOW ends with a huge bang worthy of its excellent set-up, with plot threads from Ichabod (Tom Mison) and Katrina’s (Katia Winter) son to the triumphant fist bump to just about every word said by Henry Parish (John Noble) paying off in unexpected ways.

First off, remember how the Headless Horseman, aka Death, started out as Ichabod’s one-time friend Abraham, who became implacably hostile after Katrina chose Ichabod over him? Hang on to that. You may have forgotten that detail at the start of “Bad Blood,” but never fear, a huge reminder will come.

After Ichabod stumbles upon a Revolutionary War reenactment camp, where he’s able to buy a new exact duplicate of the outfit he always wears, Jenny (Lyndie Greenwood) asks if they can now get rid of his old clothes. Ichabod refuses, for fear they will wind up in a reenactment camp.

Henry bursts into the cabin saying that the Second Horseman, War, will rise with an eclipse, scheduled to happen tonight. The only way to prevent this is with a binding spell from a witch, but the only witch Ichabod and Abbie know is Katrina, and she’s trapped in Purgatory. Ichabod confesses that he redrew the map from memory and, after some recriminations, Abbie agrees that they should go fetch Katrina. For one thing, after a lifetime of being terrorized by him, Abbie wants to confront Moloch. Jenny worries that, per prophecy, Ichabod will betray Abbie and Henry warns Abbie and Ichabod not to eat or drink anything in Purgatory or they’ll be trapped there forever.

Ichabod and Abbie travel to Purgatory, and each is promptly faced with temptation in the form of very convincing hallucinations. Abbie experiences herself as being back in the cabin with Sheriff Corbin (Clancy Brown) and Andy Brooks (John Cho), both alive and well and telling Abbie she’s recovering from being knocked out during her training at the FBI academy in Quantico. Ichabod is welcomed back to England by his proud father (Victor Garber), who embraces him. Abbie is offered pie, Ichabod is offered a drink – and each recalls the other. Ichabod further remembers that his father disowned him. Their hallucinations turn demonic and both flee their respective scenes, to meet in the forest together. When neither is sure the other is real, Abbie asks Ichabod to repeat the celebratory gesture she taught him, and he gives her a fist bump. Go team!

Jenny has been set the task of going through Corbin’s hundreds of hours of tapes while Abbie and Ichabod are gone. One of the prophecies in George Washington’s Bible is “the saint’s name is a sign.” Nobody knows what this means until Jenny drives out to an abandoned church they’ve been investigating. She tries to call Abbie, but her vehicle is upended by the Headless Horseman and Jenny is knocked unconscious in the wreckage.

In Purgatory, Ichabod and Abbie find Katrina, who first tells them they must go. When Ichabod explains why Katrina is needed topside, she reluctantly reveals that she can leave – but someone else must take her place. Abbie volunteers, still insisting she needs to confront Moloch. Katrina gives her a medallion that will hold Moloch at bay and Ichabod swears to return for Abbie.

When Ichabod and Katrina return to Henry, they – and we – learn a few unwelcome truths, while Abbie, in Purgatory, learns what they know. Abbie lost a few memories of her thirteen-years-ago encounter in the woods with Moloch. Fighting Moloch in Purgatory, Abbie burns the demon with the medallion, but loses the protective object in the process. Fleeing, she enters a life-sized version of a dollhouse that she and Jenny used to play with, where Abbie promised her little sister they’d always be safe. Inside the dollhouse are Abbie’s younger self and an even younger Jenny.

Henry reveals himself to be the adult Jeremy, Ichabod and Katrina’s son who was buried and apparently killed by Katrina’s vengeful cover two hundred years ago. Moloch finally unearthed Henry – Abbie saw this but suppressed the memory. She’s now trapped in the Purgatory dollhouse with it.

Henry/Jeremy is furious with his parents for abandoning him, even though they could hardly help it (what with Ichabod being trapped underground and not even knowing Katrina was pregnant, and Katrina being trapped in Purgatory). What Jenny saw – and what Ichabod and Katrina now see – is the sign for the abandoned church, “St. Henry’s Parish.”

Just as Ichabod’s old friend Abraham is now the Horseman Death, Henry/Jeremy is War. War isn’t coming to Sleepy Hollow; it’s already here. Henry/Jeremy causes his parents to be bound with vines, then renders Katrina unconscious. Against Ichabod’s screamed objections, Henry/Jeremy turns Katrina over to headless former suitor Abraham, aka Death. Then Henry/Jeremy dumps Ichabod into the coffin where the boy was imprisoned for so many years.

This is how you do reveals, cliffhangers and everything else that makes a season finale great.

As Henry/Jeremy points out, the clues were there all along (well, maybe not the “St. Henry’s Parish” sign). Ichabod and Abbie were thoroughly taken in by Henry’s sweet, helpful psychic act, complete with pretend reluctant. Although the show isn’t going to go meta on us, chances are that the audience was even more bamboozled by FRINGE fondness for actor Noble, who of course can be charming and moving as all get-out. The double whammy of him being not only War but also Ichabod and Katrina’s only child is perfect (even in a TV universe where several shows have parents and children of the same age due to supernatural/suspended animation plot developments).

The worlds of temptation given to Abbie and Ichabod make total sense, and Garber is especially good as Ichabod’s erudite father. Purgatory as a place where aberrations are literally thick on the ground – Ichabod and Abbie matter-of-factly step around some horrid little abominations crawling around their feet – is well-conceived and well-executed, creepy but not getting in the way of the racing storyline.

It’s also pleasing that – for the time being, at least – the prophecy about the Witnesses betraying each other turns out to be a hellish lie. One of the most appealing aspects of SLEEPY HOLLOW is the buddy bond between our heroes and it’s refreshing that, though Ichabod and Abbie are in mortal peril, their friendship remains intact.

Although “Bad Blood” ends on a huge “How will they get out of this?”, we have faith that they will – that, or Season 2 is going to be not only weird (that’s a given), but also unusually short. This said, more SLEEPY HOLLOW cannot come soon enough. Great job all the way round.