A decent premise, but an emotional over-reach 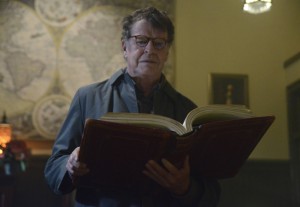 So far, SLEEPY HOLLOW has maintained a good balance between huge, crazy, entertaining mythic plot twists and identifiable human emotions and behavior. However, with “The Golem,” the show dumps just a little too much on our hero Ichabod Crane (Tom Mison). He’s still adjusting to the fact that he’s two hundred and fifty years in the future and still trying to rescue his wife Katrina (Katia Winter) from Purgatory. Giving the poor guy knowledge that he had a son who grew up alone and was murdered and then having him chalk this up to one more thing the bad guys have done, however stoic he is about it, seems a stretch in character terms.

Having learned from Abbie’s (Nicole Beharie) vision in the previous episode “Sanctuary” that Katrina gave birth to a son, Ichabod summons sin eater Henry Parish (John Noble). Although Henry is reluctant, he agrees to use his gifts to help Ichabod momentarily reach Katrina in Purgatory. Katrina is amazed to see Ichabod in her prison, but explains that she didn’t realize she was pregnant when she and Ichabod last saw each other. Her coven banished her for putting Ichabod in stasis and Katrina feared they would harm her child, so she gave the baby, a boy she named Jeremy, to a couple who are two of Abbie’s ancestors. The coven was ultimately responsible for sending Katrina to Purgatory.

Ichabod survives his visit to Purgatory. Further research he, Abbie and Henry do reveals that Jeremy had his mother’s powers and started fires simply by weeping. He accidentally burned down his foster parents’ home and was then sent to an orphanage where Jeremy psychically created a protector, a huge, powerful Golem made of earth. The Golem killed the physically abusive asylum director and Jeremy ran.

With the Golem killing a witch in the present, our team tracks down four powerful members of the still-existing coven. Ichabod wants to protect them from the Golem, but also wants to see if they can bring Katrina out of Purgatory. The witches tell him they are fated to die on this night. They also tell Ichabod that the coven tried to recruit Jeremy, but he refused. With the Golem killing Jeremy’s enemies, the coven felt it was too dangerous to let Jeremy live, so they used a spell to stop his heart. The Golem can only be killed by Jeremy’s blood.

Since the witches can’t or won’t retrieve Katrina, since they don’t want to be saved and since he’s understandably and mightily angry with them, Ichabod leaves them where they are. However, once the Golem is done with the witches, it threatens innocent bystanders.

Ichabod mourns that, even though it wasn’t his choice, he wasn’t there to be a father to Jeremy. He also apologizes to Abbie for the fact that his son killed her ancestors; Abbie takes it entirely in stride and doesn’t blame Ichabod at all. Ichabod realizes that, as his son’s protector, the Golem may have been the closest thing to a parent Jeremy had.

Ichabod begs the Golem to stop, and thanks it for everything it did for his son. The Golem pauses, but then begins to rampage again, so Ichabod stabs it with a piece of glass that has his blood (as Jeremy’s father, he has the same blood). The Golem collapses and Ichabod holds its hand as it fades away.

As Ichabod recovers his equilibrium, Abbie gives him a Christmas stocking. She goes out for a moment and Ichabod has a vision of Moloch declaring that Moloch will take Abbie’s soul – and Ichabod will deliver it to him. Ichabod comes to and tells Abbie of his terrifying vision.

In other news, Frank Irving (Orlando Jones) visits his old priest who, not realizing what Frank is actually asking about, spreads more gloom by saying that the “witnesses” in the Bible are martyrs and their followers tend to die as well. Frank then takes his daughter Macy (Amandla Stenberg) to the park. The hot chocolate vendor becomes possessed by a demon and threatens Frank about Macy. Frank grabs the hot chocolate vendor and the demon leaps into someone else, leaving the vendor confused and scared and Frank in trouble with the park cops, not to mention Macy, who thinks her dad is losing his mind.

The subplot with Frank gives him dimension and motivation, and it’s easy to see how it can be tied into the main story. As for all the portents of fate, we’re not sure if we’re being told what to expect or if this is what we hope Ichabod and Abbie to fight against. Since Ichabod seems the self-sacrificing type and Abbie is a hero, they may well go down fighting, but let’s hope this isn’t until the series ends (yes, someone else can take up the fight, but Mison and Beharie are great together).

Having the coven carry into the present works well enough and as monsters of the week go, the Golem is just fine. Giving it a personal connection to Ichabod is a fine idea. However, we see Ichabod remain consistently driven by the need to save his wife and horrified that Katrina didn’t tell him they had a child. For Ichabod then to discover the child grew up alone and was murdered seems like something that should have a more enduring, visible impact on the man. Now, it’s very possible that we’ll see a lingering effect, but the way the end of the “Golem” episode is written and paced suggests that Ichabod is now absorbed by this new threat. There are a lot of things one can shake off in a war, but finding and losing an only child wouldn’t seem to be one of them.

Noble is of course an asset whenever he appears, though once Henry is done getting Ichabod into and out of Purgatory, it feels like the actor and character are underused for the rest of the episode.

“The Golem” ends on a good cliffhanger note, it’s just that what precedes it seems like it should cast a longer shadow.