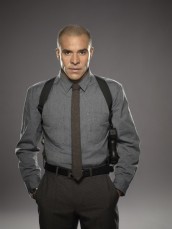 Exclusive Interview: ALMOST HUMAN star Michael Irby on getting his jerk on

The actor talks playing the detective who doesn't like Kennex 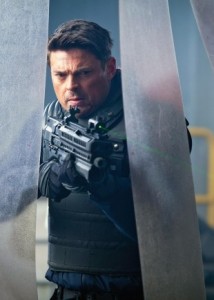 Irby, born in Palm Springs, California, has plenty of cop/FBI/military film and TV experience – he had a series regular tours of duty with THE UNIT and LINE OF FIRE, as well as work on 24, LAW & ORDER, CSI: MIAMI, NCIS: LOS ANGELES, BONES, THE FINDER, PERSON OF INTEREST, HAWAII FIVE-0, ELEMENTARY, CASTLE and many others, plus a stint on the supernatural series HAUNTED. His feature work includes FLIGHTPLAN, FAST FIVE, LAW ABIDING CITIZEN and the upcoming DIRTY PEOPLE.

At an event sponsored by Fox for the Television Critics Association, Irby explains why Detective Paul doesn’t like Detective Kennex, plus a lot more about ALMOST HUMAN.

ASSIGNMENT X: As Detective Paul, what is your relationship like with your captain?

AX: Does Paul resent the fact that Kennex can sometimes tell the captain what to do?

IRBY: Very much so. Because I have a respect for the captain. I actually have my eye on the prize. I think I’m upwardly mobile; I think I’d like to be the captain some day. And he’s kind of the new kid back in school, and all of the girls, and everybody’s excited to have him back and Paul’s got his eye on him. Paul’s not part of the cheerleading parade, happy that John Kennex is back.

AX: So your character is there to basically go, “Kennex is a jerk”?

AX: Do you have any feelings at all towards Kennex’s android partner Dorian, or do you think Dorian is basically a machine that gets things done?

AX: Does Detective Paul also have a cyborg partner?

AX: And do you just think of him as being just a tool of the job, like a gun?

IRBY: That’s all he is – he’s a screwdriver. He helps me get my job done. I don’t mind modifying my robots to work for me if they want to get a little lippy. I’ve got to make sure I put them in place. But I’m kind of a Renaissance man when it comes to that kind of stuff. My Richard Paul is a guy who was around a thousand years ago; he’ll be around a thousand years from now.

AX: Is Richard Paul kind of surprised at John Kennex for continually being so angry at his screwdrivers?

IRBY: No, I’m not surprised by that, because sometimes these things will actually end up working against us, all the power tools, and sometimes you don’t need a hammer when you actually need a pair of scissors. So I think that John’s attitude toward the robots – he actually disdains them, but I think that’s because he’s part [cyborg, as he has a robotic leg]. I don’t mind my MX. I call it “Coffee, two sugars” [laughs].

AX: Is this a genre that you like? Did you like ROBOCOP and BATTLESTAR GALACTICA and other stories of cyborgs and androids?

IRBY: I was fourteen years old once. I was just a young man who was fascinated with the world and the ideas of it changing. But I also remember getting a pager and I thought, “Wow, this is pretty crazy. I’m no doctor, I’m no drug dealer, but I’ve got my pager.” And now it’s changed and I’ve got my iPhone and my son told me I got my iPhone too late, because the 5 was coming out next week and I was, “What’s the 5? I just got the 4.” So I’m kind of a traditionalist when it comes to that, but [ALMOST HUMAN] is a cool world. This is a neat world.

AX: You’ve played a lot of law enforcement people before. Do you get cooler guns in this new world?

IRBY: Yes, the guns have all been modified, the bullets and the sightings and everything is different. A lot of that stuff is going to get covered in post[-production] , but it’s all pretty basic – it’s still the same stuff that makes the world go round. Love, hate, greed – all the same things.

AX: What are the crimes like in the ALMOST HUMAN world?

IRBY: Well, you know, we still have organized crime, we still have the Syndicate, we’re going to be getting into that more and more, but there’s still good versus evil. The second episode, there’s some cool technology and different ways that people can be terminated, and I think the discovery of that is also kind of interesting to the actor, and so as the pages keep turning, I keep learning. It’s cool.

AX: Did you have to learn anything else for this role?

IRBY: I had to learn how to stop smiling. I’m kind of a pretty easygoing guy. My son knows that I play a lot of bad guys, but that’s not the way that Michael Irby is. Richard Paul is a man on an island. He doesn’t need anybody. He doesn’t need anything. He’s got himself, he knows what he does and he’s a great cop.

AX: Did you time working on THE UNIT help with this role?

IRBY: Very much so. That was a great experience, it was a great show. I really felt like we were doing it for the boys and girls –it was about showing respect and this is the world that you’re in.

AX: Is there anything else you’d like to say about the show?

IRBY: Keep loving, just keep taking care of each other and the human side will show. I think that’s what Joel [Wyman] is trying to do. I don’t think it’s about technology, I think it’s about actually getting back in touch and not forgetting how to hug each other, look each other in the eye.