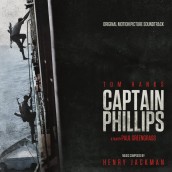 Henry Jackman creates a beyond-intense beat for freeing a hostage

Where most Hollywood films do their best to instill some sense of reality into true-life movies, director Paul Greengrass has the ability to make his re-enactments real, which makes it no easy task for the composer to musically capture that sense of cinema verite. Where John Powell did an admirable job of creating an inevitable sense of dread with the ticking time-bomb percussion, Arabic suspense and tragic heroism that would send Greengrass’ UNITED 93 to its awful fate, the director’s new, equally gripping, but far “happier” ending for the true story of CAPTAIN PHILLIPS demands a way more visceral approach, and significantly more sonic presence from musician Henry Jackman.

Don’t even think of looking for that composer’s military hoo-raaa approach for GI JOE: RETALIATION here in the SEAL-assisted rescue. For CAPTAIN PHILLIPS is all about frantic confusion, even in the midst of a decidedly mild-mannered hero’s determination. Given a soundtrack that must set a record for continual screaming and menace, Jackman draws on all manner of African-Arabic percussion to embody the tribal nature of the Sudanese pirates, a wall of thrumming, pounding menace that makes the hijacker’s intent all the more furious – as contrasted with the clear-cut rhythmic mission of Phillips’ saviors. Yet while this is a movie that’s very much about calm in a sea of aggression, the sheer, complex relentlessness of Jackman’s score is as exciting as it is adrenalin-filled, creating a “you are there” impact that makes the listen an enthralling, rhythmically breathless journey into one man’s most nightmarish experience- while offering just a bit of tender redemption for the end – a deserved gift of unvarnished melody in a score of frightening, riveting intensity – music that’s as suspensefully real as it gets.

Clink on the link to Purchase the CAPTAIN PHILLIPS soundtrack