The actor also talks his role in GRACE OF MONACO 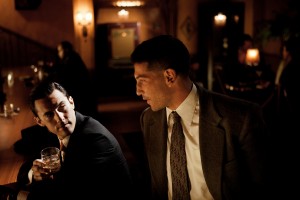 Ventimiglia, originally from Anaheim, California, has a lot of series regular characters under his belt, including Jed Perry on OPPOSITE SEX, Chris Pierce on AMERICAN DREAMS, Jess Mariano on GILMORE GIRLS, Richard Thorne III on THE BEDFORD DIARIES and the heroic Peter Petrelli on four seasons of HEROES, as well as voicing the title character on the animated WOLVERINE series and playing Rocky Balboa’s son in ROCKY BALBOA. Ventimiglia has also produced and starred in the horror film static and currently executive produces and stars in Crackle’s ongoing thriller series CHOSEN.

When TNT opens up the L.A. soundstages of MOB CITY (which has its two-hour first-season finale Wednesday, December 18) for the Television Critics Association, Ventimiglia spills about playing the shysters for the wise guys.

ASSIGNMENT X: What appealed to you first, the overall project or your character?

MILO VENTIMIGLIA: You want to know the funny part? When I first read the script, the draft that I got I think ended at page forty-something. My character hadn’t even appeared yet. I read the script and I called my agents and I said, “This is the one I want to do. This is it. It doesn’t matter [that the character hasn’t appeared yet]. This is such a beautiful, beautiful script that regardless of whatever the character is, given the short block that he’s the fixer for the Mob, I want to be a part of this.”

AX: How would you describe Ned Stax?

VENTIMIGLIA: You know, he’s the kind of guy who has bosses. He has bosses who have needs. Those needs sometimes aren’t quite kosher. And that’s the thing that a lot of people fail to understand – back in the Forties inL.A., there was a very, very big Jewish Mafia. It’s Bugsy Siegel, it’s Mickey Cohen. There was also the Italian side and the African-American side. They had huge, huge influence, too, down on Central Avenue. So everybody was fighting for a piece of the pie. My character, the service that he does, is to his bosses, but also, given Frank as a storyteller, he has personal relationships which cut into all of that. You learn pretty quick, right off the bat in the pilot, just who Ned Stax is in relation to some of the other characters, Joe Teague and that.

AX: Was there something interesting to you about this aspect of L.A. in the Forties?

VENTIMIGLIA: You know, I grew up out here and I didn’t understand how seedy Los Angeles was and how divided it was in the Forties. You hear about Mickey Cohen and you hear about Bugsy Siegel, the building of a modern L.A., and the influence of the Mob inL.A., and I didn’t quite understand much about it ‘til reading John Buntin’s book and the getting into what we’re doing here on the show that Frank was writing. But it’s one of those things that, coming from here, it meant a lot to me to understand, to kind of hold close to my heart the history of what L.A. and our show is.

AX: Are there things you especially like from the period?

VENTIMIGLIA: The tire companies bought out all the rail cars. And now us modern folks suffer from not the most efficient form of public transportation. I’ll tell you what – I still ride the Big Blue Bus, proudly I do.

AX: You’re in the upcoming film GRACE OF MONACO with Nicole Kidman, playing a real person who was alive in the Fifties …

VENTIMIGLIA: I play Grace Kelly’s press agent, Rupert Allan, a real guy, and when the principality of Monaco, when they are needing to redefine and show another side of who they are, they bring in Grace’s p.r. guy, her press agent, to help change people’s perception of who she is. So in a way, funnily enough, the character I’m playing in that, he was a fixer, he was a guy who came in with something he had to do. Similar to what I’m doing [in MOB CITY].

AX: What’s the most important thing to know about the first season of MOB CITY?

VENTIMIGLIA: Beautiful, beautiful words, beautiful, talented actors, in a beautiful setting, on a network that I think is giving something different to the audiences, trying to have a grandness, but also still make it accessible, these worlds through these characters that Frank is writing.