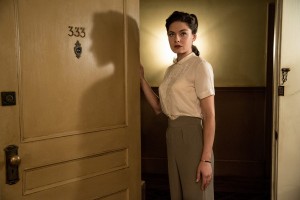 Davalos comes off a lot lighter when she’s not in character. The actress, born in France and a world traveler since then, previously worked with MOB CITY creator (working from John Buntin’s L.A. NOIR book/executive producer/director Frank Darabont on the feature film THE MIST. Davalos’ other roles include a recurring gig as Gwen Raiden on ANGEL, a series regular role in REUNION and key roles in the films THE CHRONICLES OF RIDDICK and CLASH OF THE TITANS.

TNT invites the Television Critics Association to tour the MOB CITY soundstages. Davalos takes time to talk about her character in front of what turns out to be the exterior of Jasmine’s walk-up apartment, fire escape outside and personal belongings within. Some of the set décor turns out to be not only donated but also created by Davalos.

ASSIGNMENT X: Does Jasmine have her own set?

AX: Did you get to make any contributions to the apartment set?

DAVALOS: Well, predominantly – I’m also a photographer. Jasmine’s a photographer, and so they asked me to bring in some of my own photographs, so my photographs are all over that apartment.

AX: Can you talk about Jasmine as a character?

DAVALOS: To me, she’s very much the ordinary woman in extraordinary circumstances. She’s gotten herself into a tidal disaster, basically. She’s found herself in a very difficult situation. She’s surrounded by men with incredible power and incredible brawn and she’s sort of navigating that tide as best she can.

AX: Is Jasmine involved in any romantic liaisons on any various sides of the law?

AX: How is the period dialogue for you?

DAVALOS: I love it. I’ve never had so much fun with dialogue ever.

AX: Do you talk to Frank Darabont about the dialogue at all, or do you just go, “Right, got it”?

DAVALOS: I just go in and do it. Because we’re shooting multiple episodes at a time, there hasn’t been a whole bunch of time [for discussion]. So it’s a lot of getting the entire week down for multiple episodes, running in and doing it. But I’m honored that he trusts me and I trust him.

AX: Does the period wardrobe do anything for you in playing Jasmine?

DAVALOS: I absolutely love it. Our costume designer Giovanna [Ottobre-Melton] just came up with the hose with the seam and the garters and the long line and the whole thing. Yeah, absolutely. It’s heaven. Most of it is vintage, but the pieces that aren’t vintage are handmade by Giovanna. This [indicates costume] was handmade for me, to me.

AX: Do you shoot in black-and-white?

DAVALOS: I do film, black-and-white. I shoot with a Leica.

AX: You were born in Paris and you travel all over the world. Do you like Los Angeles?

DAVALOS: You know, I have a difficult time with Los Angeles, to be honest. I’m not a big fan. I find it very difficult to find all the positive elements, except that my grandfather is here, which makes it a lovable place, but I long for New York and I miss Paris. What I do love is the remnant of another time here. We have very a very difference sense of it here.New York, obviously, you see the décor, you see it everywhere, but here you have to find little gems. Just driving around even Hollywood, you find these little houses that have been there since the Twenties, just little architectural details. And it’s a flavor that still exists here.

AX: Is there anything else you’d like to say about Jasmine or MOB CITY?

DAVALOS: Oh, my goodness. I just love this character so much.