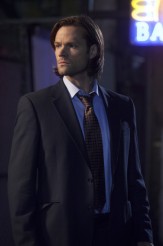 An episode with a number of sharp, shocking turns 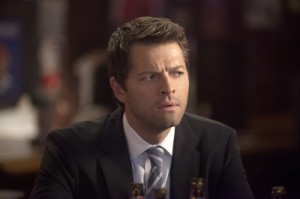 The Season 9 arc of SUPERNATURAL takes a great leap forward with “Holy Terror.” By the episode’s end, we have lost one major character, learned that another is not who he seems, someone else is transformed and poor Dean (Jensen Ackles) ends up in the metaphorical creek without a paddle or even a boat.

Factions of angels are slaughtering each other. When Dean and Sam (Jared Padalecki) go to investigate one such incident, Ezekiel-in-Sam is uncomfortable, not wanting to encounter other angels. When Castiel (Misha Collins) shows up on the scene, Dean has to once more take Castiel aside and reiterate that Sam has an angel inside him who’s still healing him, though it’s taking longer than Dean would like.

When Sam/Ezekiel is out for a walk, he is stopped by Metatron (Curtis Armstrong), formerly the scribe of God and currently the sole angel in Heaven since he arranged for the fall of all the rest. Metatron knows Ezekiel is really Gadriel, the angel who accidentally let the serpent into Eden. Metatron says he’s decided he’s lonely in Heaven and wants to let a handpicked few angels back inside. Gadriel can be one of them – if he proves his loyalty to Metatron by taking out a few targets.

Still human, Castiel prays all day and night, in every position of supplication known to the world’s religions. Fellow angel Muriel hears his pleas and Cass starts to talk her into helping him, but they are both kidnapped by Malachai, one of the angel faction leaders. Malachai has his hench-angel Theo kill Muriel and torture Castiel. During the torture session, Malachai says that many angels died in the fall to Earth, naming Ezekiel as one of them. However, left alone with Castiel, Theo wants Cass to contact Metatron for him. Castiel gets Theo to free him, then kills Theo and takes the angel’s grace, thereby becoming an angel himself again.

Castiel calls Dean and says that he doesn’t know who Ezekiel really is, but whoever is in Sam is lying about his identity. Since the angel can only be expelled if Sam wills it, Dean gets Prophet of the Lord Kevin (Osric Chau) to do a spell so that Dean can talk to Sam without Ezekiel-in-Sam overhearing. Dean explains to his brother that he tricked Sam into accepting the angel that Sam hasn’t known was even there. Sam now needs to eject the angel.

Sam punches Dean in the face – and then kills Kevin. It’s not really Sam at all, but rather Gadriel, who pretended to be Sam while Dean was explaining things. Gadriel says Sam is no more and leaves Dean weeping on the floor.

Let’s take stock of all the surprises “Holy Terror” manages to spring. We knew Ezekiel was being a little iffy, but we had no idea he was an impostor, we didn’t know Castiel was going to get his wings back, especially by offing another angel and we didn’t see Kevin’s assassination coming. In a genre that too often telegraphs where things are going, this cluster of developments coming unheralded all at once is great storytelling.

Unless SUPERNATURAL is going to head in a very unexpected direction indeed, we can assume that Gadriel is lying (or mistaken) about Sam being gone for good. However, kudos to Padalecki for doing such a fine job with taking Ezekiel from reserved with Dean to fearful with Metatron to ruthless badass.

Ackles, meanwhile, shows that he can give us Dean at a low enough ebb to let his grief fully surface. Collins is clearly having fun in the prayer montage and Armstrong remains inspired casting as the grungy, wily Metatron.

Chau doesn’t get any big scenes here; Kevin simply grumbles and banters in a usual way.  This is smart on the part of the creative team, as we’re not tipped off by a huge scene that something is going to happen to the character. Chau’s easy, Everyman charm will be missed.

The biggest question is clearly how Sam will come back, with a secondary matter being who we’ll see as the next Prophet of the Lord. (Perhaps the Prophet Chuck may reappear yet.) In any event, “Holy Terror” is an episode that leaves us exclaiming “Holy …!”