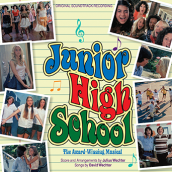 This retro school music has it all over GLEE

Kritzerland has released such singing-dancing cult movie numbers as THE GHASTLY LOVE OF JOHNNY X and label founder Bruce Kimmel’s own FIRST NUDIE MUSICAL. But if they’ve put out one soundtrack, and film that’s long overdue for GLEE-like enthusiasm, then it’s JUNIOR HIGH SCHOOL. I’d certainly never heard of it before watching this beguiling production as part of a teen throwback night at LA’s Cinefamily theater. As a member of The Class of 1983, this 1978 feature gave me a beguiling rush that recalled the rush of seeing GREASE for the first time that very same year. For both productions capture that same retro-groovy innocence that’s all about the energetic rush of youth. But while “Grease’s” infinitely memorable tunes remained firmly rooted in the 1950s, the nearly-as-great numbers in JUNIOR HIGH SCHOOL have a far broader range, as delivered by the charmingly raw voices of a bunch of kids dancing about the John Muir High School in Burbank – one of whom would grow up to b Paula Abdul.

Created by Michael Nankin and David Wechter as an elaborate 45-minute “short” that should’ve been a feature, the songs of JUNIOR HIGH SCHOOL capture a mixture of angst, innocence and adult feelings that reflect the universal pre-high experience, as done with hilariously catchy and heartfelt lyrics and a dazzling range of styles. “The Party Song” is a doo-wop invitation to the big shindig, country cowpoke rhythms deliver absurdist teacher instructions for “Wood Shop / Home Ec,” “The P.E. Song” has a Klezmer chorus of coaches, while two affection-struck kids “Duet” to an ersatz Burt Bacharach piano and brass melody. But the jaw-dropping highlight is the Dixieland-Ragtime shower-stopper “The Itty Bitty Titty Committee,” with a rollicking chorus of girls begging for their bra-enchancing hormones to kick in. Wechter’s wonderful lyrics joyfully burst out here with the enthusiasm of a Broadway savant, having fun with the social ridiculousness of higher public education in a way that’s sweetly honest and infinitely catchy. The score by David’s dad Julius (of the Baja Marimba Band) is the kind of jazzily swinging, pizzicato pokey stuff that would be right at home on GILLIGAN’S ISLAND, or any number of classic sitcoms you might imagine these students rushing home to watch after school, an instrumental goofiness that is a big part of JUNIOR’s charm.

A festival darling when it came out, but still not long enough to have achieved the fame it should have, JUNIOR HIGH SCHOOL ensured that its creators would graduate to non-musically contribute to the likes of THE GATE and BATTLESTAR GALACTICA. Kritzerland’s soundtrack offers some of their more tuneful latter works, including the Schoolhouse Rock-worthy “The Jimiiny Gravity Song,” the demo for the title song for their bigger foray into PG-rated grooviness of Disney’s MIDNIGHT MADNESS and the Carpenters-like melody for THE BIKINI SHOP, which manages to make Double-D exploitation as sunnily inviting as a trip album, which Kritzerland does one better by offer a blu ray of JUNIOR HIGH SCHOOL itself – which is likely a first for a label to offer both a soundtrack and movie for an institution that more than ever needs to graduate to cult fame.

Clink on the link to Purchase the JUNIOR HIGH SCHOOL soundtrack