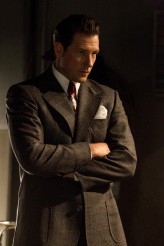 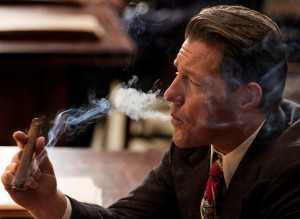 Burns, originally from Queens, New York, burst onto the indie film scene as an actor/writer/director/producer with 1995’s THE BROTHERS McMULLEN. He’s gone on to write/direct/produce a dozen other projects. As an actor, his feature film credits include SAVING PRIVATE RYAN, 27 DRESSES, MAN ON A LEDGE and he’s played himself on ENTOURAGE, but most of his roles call for Burns to play someone who is essentially decent, or at least possesses some self-control. Bugsy is new territory for him.

BURNS: Oh, hands down. Hands down. I haven’t had this much fun acting since SAVING PRIVATE RYAN, and it’s because I’m getting an opportunity to tap into something I haven’t tapped into before as an actor. But it’s also more than just that side. Frank [Darabont, MOB CITY creator/executive producer] has written such a great version of him that a lot of times, you look at the scene you have to do the next day, and you’re like, “Oh, my God, how are we going to make this work?” It’s the complete opposite on this. You look at your lines like, “Oh, tomorrow’s going to be a great day at the office.”

AX: Is this more fun than acting in your own movies?

BURNS: Yes, quite honestly. The stuff I write for myself – I’m writing towards the things I think are my strengths as an actor, that I can do very easily. If it’s a fastball down the middle, then I do that, because [when directing and writing and producing] I’ve got everything else to do. Playing Bugsy required a lot more work on my part as an actor as far as preparation, thinking about who this guy is, how I want to approach those scenes, so very different.

AX: Did you do a lot of research into the real Bugsy Siegel?

BURNS: I did not do a ton. I did enough to get re-familiar with the time, who Bugsy was, his relationship to L.A. when he left from New York to deal with Vegas and the Flamingo. But that was pretty much it. I mean, I spoke to Frank, and it’s more about, this guy needs to be larger than life, very cocky but also charming, that sort of thing. So quite honestly, it was not a ton – just enough to get familiar with a little bit more of the time period and specifically Bugsy.

AX: What, if anything, do you think made him different from other gangsters of his era?

BURNS: Seems to be that he was crazier than the rest of them [laughs]. He’s a guy in every situation, he doesn’t have a governor. He says whatever comes to mind. He reacts violently. I mean, the nickname came from the fact that he would bug out. The switch would flip and he would go. And if you’re a gangster, that’s a pretty good trait to have. So, I think that, combined with the fact that growing up in New York, he hooked up with Meyer Lansky early on, and it was the brains and brawn kind of combo .These guys figured out a way to build this empire. However, that kind of short fuse combined with the ambition is the thing that led to his downfall. But it’s a blast to play a guy who has those characteristics. All I’m doing is beating the shit out of people, shooting people. So that’s fun.

AX: How violent is Siegel?

BURNS: There are ebbs and flows. This is a guy that can go from at one point the most charming guy in the room and a split second later, the most violent guy in the room. And that’s a fun dance.

AX: Did you have to learn how to do anything physically, in terms of Forties-style fighting?

BURNS: No. There was a little dance step that I had to learn, but that didn’t take long.

AX: Bugsy has a very specific accent. Did you work on that at all?

BURNS: I’m born and raised in New York. Doing my research, I had forgotten that he’s from Brooklyn. So I was like, “Well, this is going to be a very easy accent for me to handle.” So it’s just a matter of throwing it on a little thicker than my normal speaking voice.

AX: Did you watch any other onscreen portrayals of Bugsy, or did you avoid them?

BURNS: I just didn’t watch any. I pulled out my copy of BUGSY, I was going to watch it two days before coming here, and I thought, “You know what? I’ll wait until after we wrap. We wrap on Monday, Tuesday I’ll watch Warren Beatty’s BUGSY.” I saw it when it came out. I loved it.

AX: Are all the aspects of Bugsy Siegel’s legend covered in MOB CITY?

BURNS: It’s really only part of it. We’re dealing with the Flamingo [Club], but again, we’re also dealing with fictional characters. Bugsy’s interacting with them. So that’s more of a question for Frank Darabont.

BURNS: If all goes well, I’m shooting my next film [as a producer/director], but we’re waiting for the guy to cut the check, so I won’t say that we’re making it until I get the check.