Home » we are what we are soundtrack review 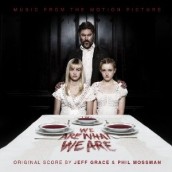 ©2013 Milan Records
WE ARE WHAT WE ARE soundtrack
Reviews

CD Review: WE ARE WHAT WE ARE soundtrack

A smart cannibal score that's underplayed, but not undercooked

Those expecting the kind of orchestrally ferocious, percussion-gnashing cannibal family score that usually comes with the rural, inbred territory aren’t going to get the expected soundtrack serving, in spite of one clan’s gruesome steadfastness that WE ARE WHAT WE ARE. The credit for this unusually intelligent, and delicate approach to a genre that splatters both flesh and instruments with equal helter-skelter abandon goes to the collaboration between composer Jeff Grace and director Jim Mickle, who previously collaborated on the apocalyptic vampire fable “Stake Land,” and now has relocated a Mexican meat-eater film for upstate New York with the same brand of haunted poetry.

Less is often creepily more for Grace, a composer most often attached to a school of horror that relies on the slow, spare build, whether it was a classically orchestral ghost story for THE INNKEEPERS, the eerie, expressionistic HOUSE OF THE DEVIL, the batshit ROOST and even the blackly comic hijinks of I SELL THE DEAD. There’s a melodic maturity at work in Grace’s style of horror scoring, a subtlety for piano, violin and unsettled electronics that comes in particularly handy when capturing the angst of two young daughters who can’t escape their father’s flesh-eating expectations. In seamless tandem with co-composers Philip Mossman and Darren Morris, WE ARE is full of doom, as well as humanity, conveying a religious sense of obedience that’s really the road to damnation for two innocents doomed to repeat the sins of the past. By staying in the shadows, Grace conveys immense waves of dread with the stroke of a violin, or a slow, pounding piano, his music the equivalent of a horror that preys on the imagination instead of explicitness. Yet Grace and his compatriots aren’t out to cheat fans with highfallutin’ musical ambition, for they’re well aware that this is a horror movie, and score, after all, excelling as well with the creeping electronics and strings that befit the genre.

Of course in a movie like this, no matter how smart it might be, you’re bound to get an ironic, finger-licking good ole’ boy country tune, here with Tommy Strange & The Feature’s “It Was Me That Made Her Bad,” while Nick Garrie’s “Cambridge Town” has a girly, Calypso folksiness to it that definitely does not belong in WE ARE WHAT WE ARE‘s rain-soaked trailer park-cum-smorgasbord.

Clink on the link Purchase WE ARE WHAT WE ARE soundtrack

Article Source: Assignment X
Article: CD Review of the WE ARE WHAT WE ARE soundtrack