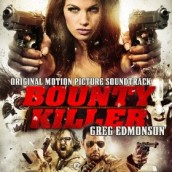 Greg Edmondson certainly knows something about a trashed-out future after his twangy sci-fi score for the cult TV show FIREFLY. And when it comes to high adventure, his videogame music for the blockbuster “Uncharted” series stands as the genre’s answer to RAIDERS OF THE LOST ARK. Though made for decidedly less than that film, his new score for this post-apocalyptic mash-up of MAD MAX and TANK GIRL is a big bunch of balls-out fun.

With a rousing orchestral performance that just might make Nashville a new symphonic scoring destination, Edmondson pours on a sound of bright, galloping nobility that would befit a Texas Ranger on horseback as well as it does a busty, scum-slaying action heroine and her five-o’clock shadow English-accented companion, who get some surprisingly lyrical piano romance as well. But as opposed to straight-up string and guitar adventure and the percussive, Indian-from India ethnic weirdness of a future gone wrong, Edmondson is also in on the movie’s jokey fun with rockabilly jams and roaring Spaghetti western-isms. In the end, BOUNTY KILLER‘s score works thrillingly as an upstart mash-up of Edmondson’s musical stylings for Captain ‘Mal’ Reynolds and Nathan Drake, hell-bent for leather in he-man lady’s clothing, music that has a subversive smile on its face while delivering justice to the wasteland.