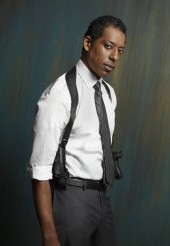 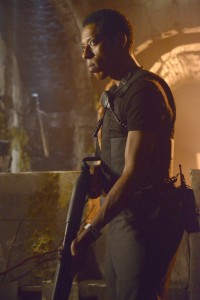 On Fox’s SLEEPY HOLLOW, Mondays at 9 PM, most of the main characters involved in saving the world from the Headless Horseman and the Apocalypse have some sort of supernatural gift. Revolutionary War veteran Ichabod Crane (Tom Mison) has been released from stasis after two and a half centuries. His chief ally, police detective Abbie Mills (Nicole Beharie), sees visions. Ichabod’s wife Katrina (Katia Winter) is trapped in limbo, but she’s a powerful witch

Then there’s Sleepy Hollow police chief Frank Irving, played by Orlando Jones. Frank, recently and unhappily cured of his skepticism a few episodes back through his own encounter with the Horseman, has only his law enforcement experience, his wits and his natural physical strength to get him through the increasing weirdness that’s descended upon his town.

Unlike the character he plays, actor Jones seems like he couldn’t be happier about being in the midst of demons, ghosts and other things that go bump in the night. This is hardly the Alabama-born actor/writer’s first go-round with the fantasy/horror genre. In features, Jones has been in FROM DUSK TILL DAWN 3, BEDAZZLED, EVOLUTION, THE TIME MACHINE and CIRQUE DU FREAK, along with dramas including MAGNOLIA, DRUMLINE and THE CHICAGO EIGHT and comedies such as SOUR GRAPES, OFFICE SPACE and MISCONCEPTIONS. Jones was also a writer and performer on television’s MADtv and created and starred in THE ORLANDO JONES SHOW, THE ADVENTURES OF CHICO AND GUAPO and the Internet series TAINTED LOVE.

However, Jones says Frank Irving is one of the few characters he’s had that allow him to play a tough guy. At a Q&A session for SLEEPY HOLLOW held by Fox for the Television Critics Association and in a private follow-up conversation, Jones talks about trying to uphold the law in a town that’s literally going to Hell.

ASSIGNMENT X: SLEEPY HOLLOW is obviously not your first drama, but Frank Irving is one of your few badasses.

AX: Were you looking forward to playing a badass?

JONES: Very much, very much. It’s funny – all the males in my family played professional sports. So when I announced I was moving to Los Angeles to be an actor, as you might imagine, the men were like [deep voice], “Hey, what’s going on?” My dad has been that guy, saying, “When are you going to play a kick-butt guy?” So he is, I think, more excited than I am because of that [laughs].

AX: Have you had to learn how to do anything in the service of kicking butt?

JONES: You know, the physical part of it, the working and kick-boxing has always been a part of what I’ve done. I luckily launched the first digital graphic novel called TAINTED LOVE just before this with Machinima. It’s an action comedy, so I was actually in the mode when they called me for this. So I think one sort of clearly begat the other, but TAINTED LOVE is at Machinima, or you can go to taintedlovemovie.com and it’s up for free. You can watch the entire graphic novel.

JONES: No, it’s live action and then it moves accordingly.

AX: In SLEEPY HOLLOW, is one of the challenges playing this guy who knows what’s happening but can’t tell his ex-wife or other law enforcement what he knows?

JONES: All the producers were really great about giving us a blueprint for what the characters and how they’re evolving and moving. So I think there are a lot of different ideas. There was this idea of sounding sort of crazy, talking about someone who’s running around chopping people’s heads off with a blade heated about five hundred degrees, which sounds pretty kooky from a law enforcement point of view. And I think the other interesting part of it was how you deal with these things that go bump in the night, that some people believe and some people think are absolutely crazy. So it fell into the conspiracy theory nature and all those other elements of the show. So I think for me, those are a lot of interesting ideas that don’t generally fall into just a procedural. Those were character ideas and other aspirational notions that I don’t think you generally find on a show.

AX: Is there an aspect of the series mythology that you find particularly interesting?

JONES: I’m really interested to see what the rest of the mythology of the Apocalypse is. I don’t know if I’m good or bad right now, so I’m going through that element of trying to figure out where I am and where I’m going. I’m really excited about the mythology of it, because I’ve always been that comic book nerd kid. So all of those elements I think I’m probably more in love with than I’ve previously been in love with in my television experience. I’m excited about that.