An okay episode with a werewolf baby shower 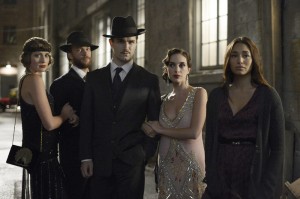 The notion of a werewolf baby shower seems intrinsically fun, not to mention made for BEING HUMAN, yet somehow in “Pack It Up, Pack It In,” the event doesn’t quite live up to its potential. Maybe it’s because there are so many plot threads that have to spin out of the sequence that it doesn’t really have time for grace notes, but it winds up seeming a little too much like a species gang confrontation and not enough like something specific to our characters.

Things are stressful enough. Then Josh’s fresh-out-of-rehab younger sister Emily (Alison Louder) turns up at the front door. Josh and Nora insist that Emily stay at the house, though they warn her there will be champagne at the party (more of a concern to a recovering alcoholic than werewolves). However, Andrew’s domineering friend Mark (James A. Woods) turns up with his wife Wendy (Stephanie Lenelin) and their entire pack of people who were turned about four months ago. They bring a lot of liquor.

Sally (Meaghan Rath) observes how depressed Emily is and tries to put a spell on the young woman so that she’ll be able to see and hear Sally. The spell doesn’t appear to work, and it blasts Sally into the 1920s, where she sees Aidan (Sam Witwer) and his then-protégé Henry (Kyle Schmid) terrorize and kill three women. Sally is horrified.

In the present, Aidan has a sad breakup with Kat (Deanna Russo). First she thinks he’s joking about being a vampire, then she wants to get him help. When Aidan proves what he is by going black-eyed and demonstrating he has no pulse, Kat is terrified and wants nothing more to do with him. Depressed, Aidan wanders the streets, until his vampire “son” Kenny (Connor Price) tracks him down and offers him some bagged blood.

Aidan indulges in so much bagged blood that he is the equivalent of drunk. He and Kenny show up at the house, not expecting it to be filled with mostly hostile werewolves. Aidan manages to defuse the situation for awhile. However, Emily sees Henry’s true distorted face – Sally’s spell causes this – and freaks out. Henry doesn’t realize Emily can see what he actually looks like (he uses mind control to make even other vamps think he appears normal) and tries to calm her down. This results in Josh starting to freak out, Aidan tries to step in, Mark the dominant werewolf gets rough and a full-scale brawl breaks out. Finally, Aidan and Kenny leave and the werewolves leave.

In the morning, Emily leaves as well. She doesn’t mind that Josh is a werewolf, but there’s too much drama going on while she’s trying to stay clean and sober. When Sally shows back up – in her experience, she was gone for two weeks – Josh gives her very nearly the same speech she got in the previous episode from Zoe about doing damage with her good intentions. Josh still considers Sally and Aidan to be family.

Sally confronts Aidan with what she saw him do in the Twenties, and says now she knows why he always tries to do the right thing – it’s to make up for his many past wrongs. Sally concludes that Aidan is a good man and she hopes he stays that way.

Nora and Josh, after some discussion, decide to join the newbie wolf pack out in the woods for the full moon. Mark apologizes and everyone begins to disrobe in anticipation of nightfall.

Having Sally see Aidan at the height of his evil in the past is a smart way for her to understand how awful he can be without having him totally go off the rails in the present. There’s a hint of romance between the two characters, but even if it remains a platonic friendship, it is more meaningful for Sally to know what Aidan can be and decide to accept him anyway, rather than accepting him because she hasn’t grasped the full measure of his monstrosity.

Josh is making judgmental noises again – all the characters do, but it feels like he does it more often, with more need to do it. We can cut him some slack because the poor guy really does take a beating, emotionally and physically, at the party, but it’s a trait that’s sometimes hard to take.

Aidan’s protracted mope over Kat seems a bit much, but then again, as Josh points out to him, it’s the only time the vampire has actually been dumped by someone else in his long existence. Aidan ultimately comes out of it with an attitude we can get behind – they broke up, he’s in pain, but nobody vanished, died or turned to ash. He also feels like he deserves some pain, though a broken heart seems like getting off easy for having been a sadistic murderer. (Then again, he spent eighteen months buried in a box, so it’s not like he hasn’t suffered.)

“Pack It In, Pack It Up” is pretty clearly establishing some conflicts to come, so it’s a good building block, but as a standalone episode, it could have gone deeper into some of the issues it raises. It also would have been nice to get another look at the weird/cute werewolf baby.

Article Source: Assignment X
Article: TV Review: BEING HUMAN – Season 4 – “Pack It Up, Pack It In”