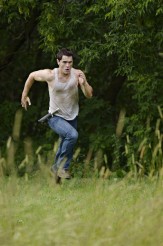 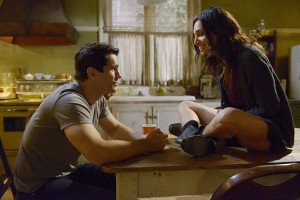 The fourth season of BEING HUMAN hits the ground running pretty literally with “Old Dog, New Tricks.” Within the story, it’s been three months since the end of last season. Vampire Aidan (Sam Witwer) and werewolf-in-human-form Nora (Kristen Hager) are trying to keep werewolf Josh (Sam Huntington) healthy. Josh has become a reverse werewolf – he’s only human during the full moon. Since his wife Nora is a regular werewolf, this means they can only have a brief time together at dusk and dawn on the full moon before one of them turns.

Adding to the problem is that Josh has become suicidal, begging the absolutely unwilling Aidan to kill him. Josh appears to accept Aidan’s argument that Nora would be lost without her husband, but Josh then leaves his cage unlocked, hoping he can force Aidan and/or Nora to kill him in wolf form.

Meanwhile, Sally the ghost (Meaghan Rath) at first seems to be in a day spa with witch Donna (Amy Aquino). This is a little strange, as we last saw Donna’s spirit grab Sally and drag her through a portal in the floor. It turns out that Sally has created the day spa with her mind as a response to Donna explaining to her for the nth time that they are bound together in a kind of limbo. Donna believes that she and Sally, who Donna says is powerful, have poked holes in the universe too many times and that the universe will collapse if Sally continues to run around in it unchecked. Donna wants Sally to remain in limbo with her until Donna finds a way to end both of them. This doesn’t sit well with Sally, who figures out that if Donna dragged them into limbo through Sally’s death spot, then Sally can exit via Donna’s death spot.

Despite the fact that the exit looks like a whirlpool of blood, Sally gets out and finds Aidan, who is overjoyed to see her – though a little worried about this possible ending of the universe business. Aidan takes Sally to see Nora and Josh, which is when they discover werewolf Josh has gotten out. Aidan refuses to kill Josh, even to save himself; when the werewolf starts to lunge, Sally flings a ring of fire at him, startling everyone, including herself. Nora succeeds in tranquilizing Josh and Sally disappears. From Sally’s point of view, she’s in the same place, but the others have disappeared.

Aidan is also having some other problems. He’s starting to see his wife Suzanna (Katharine Isabelle), who was drowned as a witch back in the 1700s. He also finds vampire Blake (Janine Theriault) in the hospital morgue. Aidan doesn’t know that Kenny (Connor Price), the teen he sired who seemed lost to the plague, has recovered and is now running the vampire community in Boston. Oh, yes, and Aidan’s human girlfriend Kat (Deanna Russo), who doesn’t know he’s a vampire, declares she loves him.

That’s an impressive amount of plot, mythology and event to pack into one episode. What makes it even more of a feat is that writer/show runner Anna Fricke allows the characters breathing room, so that Josh and Nora, Aidan and Josh, Sally and Donna, Sally and Aidan and even Blake and Kenny all have moments together that are about who they are as characters and how they are with one another, rather than just advancing the narrative.

On the downside, Josh is once again making life difficult and dangerous for everyone with his self-pity. He made Nora a werewolf; being there for her seems like the least he could do, though to be fair, we can understand why he thinks that having to care for him while he’s a werewolf is grossly interfering with Nora and Aidan’s lives. There’s also the matter of the werewolf, which doesn’t look great in full daylight.

On the upside, there are a lot of fun, sweet interactions, including Josh teasing Aidan about being a high-maintenance vampire and Sally giddy with joy at returning to the world. We’re also eager to find out why Josh is wolfy so much of the time, what’s the story with Kenny, were Suzanna has come from and how Sally might accidentally destroy the universe. These are good questions, and “Old Dog, New Tricks” makes us want to tune in to see the answers.