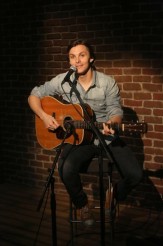 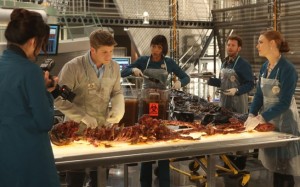 The 2012 Feature-Length Documentary Oscar went to a movie called SEARCHING FOR SUGAR MAN. The film chronicled the search for Sixto Rodriguez, a music legend for decades in South Africa, who was living in total anonymity in the U.S. with no idea that his records had taken off somewhere.

In BONES, of course, a version of this scenario is tied to murder. In “Big in the Philippines,” the team discovers that a badly mutilated corpse is that of Colin Haynes, a singer/songwriter unknown in the U.S. but a star in thePhilippines. Although Colin’s slimy, swindling manager (Kay Lenz) looks like the culprit, it turns out to be the jealous erstwhile boyfriend (Robert Baker) of the musician’s landlady/new girlfriend (Jamie Anne Allman).

At the same time, squintern Wendell Bray (Michael Grant Terry) shows up with his arm in a cast, apparently broken in a hockey skirmish with Booth (David Boreanaz). When Booth proudly shows Brennan (Emily Deschanel) cell phone footage he took of the game, she believes the injury Wendell sustained shouldn’t have caused so much damage. Without asking Wendell’s permission, Brennan examines his x-rays and discovers he probably has bone cancer. When Brennan astonishes herself by becoming to overwhelmed with emotion to speak, Booth tells Wendell of Brennan’s findings. Wendell goes to the specialist Brennan recommends and goes through a period of feeling that he should see the world and enjoy life rather than being made miserable by chemo and radiation that may not save him. Ultimately, however, he decides to fight the disease and Brennan promises she and Booth will help Wendell any way they can.

Although it isn’t discussed, financially would seem like one big way Brennan could help, as Wendell’s treatment sounds not only painful but very expensive. This aside, Terry gives a wonderful performance as a young man trying to put a brave face on shock and horror, and Deschanel really gets a chance to shine as Brennan’s emotions pour out despite the fact that the character is consciously unaware of their depth until she is in tears.

The SEARCHING FOR SUGAR MAN aspect of the mystery has so much potential that it feels like it could have comfortably taken up a whole episode had it not been made secondary to the character drama. Even so, the songs (performed in actuality by Charlie Worsham) are very agreeable – it’s easy to imagine them becoming a hit somewhere – and the plot twists are handled nicely.

One eyebrow-raiser here – maybe it’s happened on other shows and nobody’s mentioned it, but the examining of human remains scene in “Big in the Philippines” gives us a full view of a severed gender-specific male body part that normally goes unseen on network and cable TV. No objections here, just curiosity about how Broadcast Standards weighed in on this element.

As a director, Boreanaz is developing a distinctive style and goes for some nice shots – the framing of Brennan and Booth seated silently together on a bench between two identical skyscrapers is artful yet appropriate.

Overall, “Big in the Philippines” scores high on the BONES episode barometer.