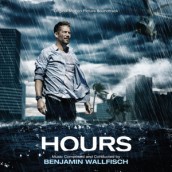 Having made his breakthrough score with the innovative Britain prison bust-out of THE ESCAPIST, Englishman Benjamin Wallfisch makes a notable return to confined spaces with his desperate musical HOURS. What makes his score particularly intriguing, and effective, is that said penitentiary is actually a post-Katrina hospital in New Orleans, where Paul Walker’s bereft husband find himself virtually chained to the respirator keeping his newborn son alive. Music is also vital in keeping company for virtual one-character dramas of this sort, and Wallfisch does a powerful job of ticking down one man’s emotionally draining journey, all while keeping soundtrack interest very much alive by segueing from pulse-quickening percussive suspense to the piano, violins and child-like bells for the innocent life he takes himself to the limit for, and the dreams of his dead wife that keep him going.

It’s a powerful ticking clock that swings from sentiment to danger, the melody as capable of taking on the beautiful half-dream state that comes with no sleep as it is the harsh samples and dangerous orchestral swells of the human flotsam that comes in with the flood waters. But unlike this ordeal, Wallfisch’s score is a grippingly dramatic, often poignantly beautiful score that’s certainly no endurance test to listen to, especially in the final, transcendent symphonic cue that seemingly takes us heaven after fighting a battle for two lives, a terrific musical payoff for what both the character, and composer have put themselves through in this thoroughly intimate disaster film.

Clink on the link to Purchase the HOURS soundtrack